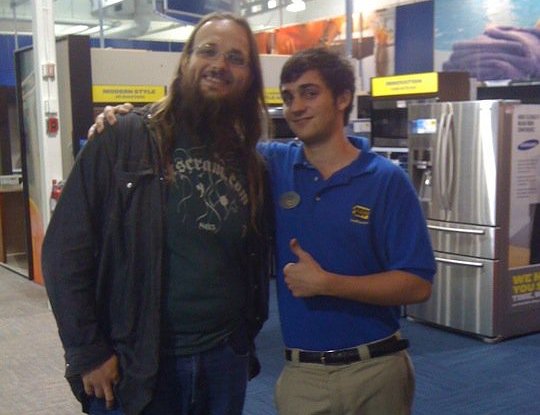 For most people, Jay Freeman isn’t exactly a household name. Neither is Saurik, his online alias. That said, if you’ve used a jailbroken iPhone since 2008 then you’ve definitely seen both names frequently. Saurik is the developer behind Cydia, the package manager we use to easily install tweaks, themes, and other software that Apple won’t allow developer to distribute through iTunes.

You might know his name, but would you recognize Jay Freeman if he was walking down the street? If you did, would you approach him? Would you ask him questions? Would you pose for a picture with him and post it on Reddit? Well, that’s what the first stranger who recognized him did…

Jay Freeman himself posted on the thread within an hour of its appearance, where he confirmed the picture as authentic in a lengthy reply. The photo was taken before the iPhone 4 came out, according to the original poster, while Freeman was shopping for a hackable TV for his office.

Has the public life changed for Saurik since the days of the 3GS? According to Saurik, it has:

Today, the situation is a little different: I actually get recognized a lot. Sometimes it is kind of cool, sometimes it is really awkward. It mostly, however, comes down to people wanting to ask me the question “so, when’s the next jailbreak coming out?”. I’ve mostly gotten used to the idea that the bartender will ask me this while pouring my club soda, and I’m totally acclimated to the manager of the bank asking me this while approving my wire transfers (often now after the teller had already asked me the same question). I’m only somewhat surprised when the guy at the kitchen appliance store asks me.

Unfortunately, asking Saurik about the upcoming jailbreak won’t net you any secret insider information. Take, for example, an encounter at Bed, Bath, and Beyond, of all places:

Of course, he asked me for a status update on the jailbreak, and I pretty much just told him the same status updates that planetbeing (someone actually working directly on a jailbreak right now) has been recently giving people on Twitter.

Instead, you may want to talk to a developer who is actively working on exploits.

That said, if you ever recognize the developer behind Cydia in person and want to say hi, Saurik says he largely doesn’t regret being a public figure. He says most of his interactions with people who recognize him tend to be “cool”. Just be polite, and don’t film the guy while he’s at a conference.

If you’re interested in hearing more stories about Saurik’s status as an underground celebrity, you can read Saurik’s whole reply on Reddit. It’s lengthy, well written, and it involves Ashton Kutcher.

Would you talk to Saurik if you saw him in public? Let us know what you would say. Share your thoughts in the comments section below.