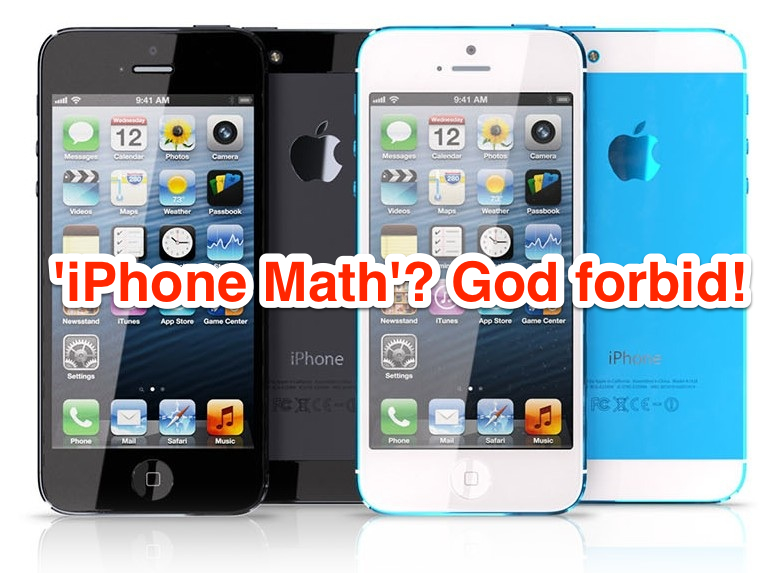 When I woke up this morning to the iPhone Math rumor, I was like ‘iPhone what?’ As insane as that purported moniker sounds, some did fall for it and took the story as is. But do you really believe Apple would adorn a refresh of its iconic smartphone with such a stupid name? Yes, the Power Mac G4 Cube also wasn’t the best moniker to begin with, but what on Earth is the ‘iPhone Math’ supposed to stand for?

Not to worry, a well-connected Apple blogger has now called into question both the trustworthiness and knowledgeability of the sources who pretentiously claim to even know an upcoming iPhone’s name…

As Cody reported, the rumor calls for three new iPhone models in 2013. He rightfully points that nothing in Apple’s naming history suggests the company would ever be cool with slapping the ‘Math’ suffix onto any of its gadgets.

Apple’s supply chain partners do not know product names. Every iPhone just says “iPhone” on the back. Same for iPads; I knew a lot about the iPad Mini before it was announced, but I didn’t know its name.

He’s spot on, though.

Assuming the source mentioned the ‘iPhone Math’ moniker in the first place, or heard it whispered by others in Apple’s supply chain, it’s likely nothing more than just a code-name. There’s no way that Apple, the most secretive corporation in the world, would let slip such a high-profile product name months ahead of the official introduction.

Matter of fact, Gruber goes as far as to “question any purported source from the supply chain who claims to even know an upcoming iPhone’s name”.

I disregard any report of an upcoming iPhone with a bigger display that doesn’t include precise pixel dimensions. Anyone in the supply chain who knows the size of the display should also know the pixels.

BrihtWire updated its original report with this clarification:

Some news sites are speculating that the real name of the “iPhone Math” product is “iPhone Max” or “iPhone +”. However, the name “iPhone Math” continues to be reported in Chinese and Taiwanese news sources that originally broke the story.

The news service also underscores that the story is still a rumor as “Apple has not made official comments or confirmed existence of this device”.

So, did anyone in their right mind believe the nonsensical ‘iPhone Math’ name stood any chance of becoming the official moniker?