You might have noticed that it is uncharacteristically redundant of Apple to have the accurate battery percentage meter beside a graphical representation of the remaining battery life. The interface only needs one or the other, though it’s still good to have an indicator on whether the power cord is connected. Personally, my preference is to stick with the percentage meter and ax the logo.

Bolt is an old jailbreak tweak that we neglected to feature when it debuted in 2011. The tweak is a relatively simple MobileSubstrate hack that removes the space-hogging battery icon from the Status Bar, but still displays a small lightning bolt icon while your device is charging…

Here’s how you can tell that Bolt is an old tweak: its only toggle in Settings enables a numeric battery percent meter. This feature would benefit users before iOS 3, when Apple introduced the numeric meter. On later firmwares, Bolt cooperates with the built in. That said, you still can enable the percentage readout included in the tweak if you really want to. It may be interesting to note that the tweak’s meter gives me a slightly different reading than the default scale in iOS 5.1.1, suggesting that it’s calculated differently.

Despite the legacy support for old firmwares, Bolt’s status bar icon supports the Retina display. Bolt is a free tweak, and is available in the BigBoss Repository on Cydia. The tweak takes effect as soon as it is installed. 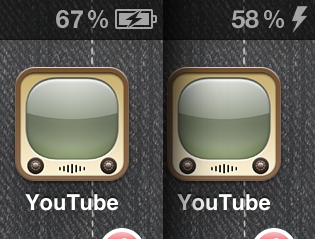 The charging battery icon with and without Bolt.

Did you get rid of the standard battery icon? Share your thoughts in the comments section.