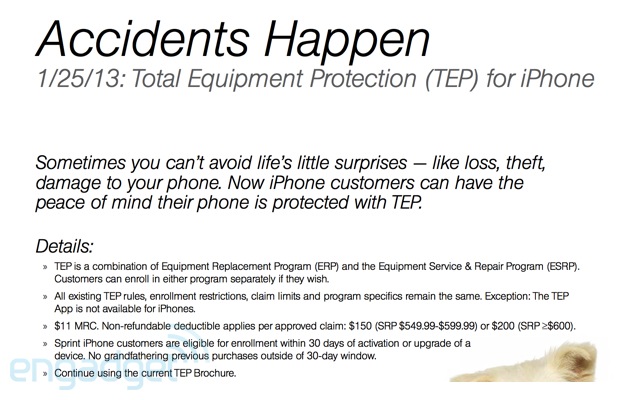 After initially saying that it would not be offering its Total Equipment Protection (TEP) insurance to iPhone customers, Sprint appears to have had a change of heart. A new leaked internal memo shows that the carrier is gearing up to roll out the service to new Apple handsets later this month…

Engadget posts the above screenshot, which it says is of an internal Sprint memo sent in by an anonymous tipster. And according to the note, the carrier will begin offering its Total Equipment Protection program — which guards against loss, theft and damage — to new iPhone buyers on January 25.

Similar to AppleCare+, Sprint will allow customers to add the TEP service to any iPhone within 30 days of upgrade or activation. But unlike Apple’s offering, the carrier’s insurance plan comes with some fairly significant deductibles, ranging from $150 – $200 per claim depending on the device.

But the $200 and the recurring $11 monthly charge don’t seem like much compared to the $700 full retail price you’d likely have to pay if something happened to your iPhone. So if you’re going to be buying a new Sprint model soon, and don’t go with AppleCare+, you might want to check it out.

What’s your take on device insurance? Is it worth it?