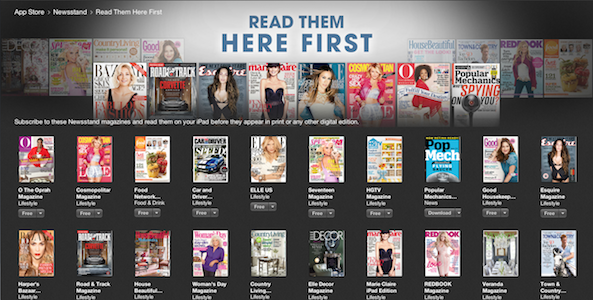 Today has actually been a pretty big day for Newsstand. Earlier we learned that long-time holdout Rolling Stone Magazine finally landed on the iPad. And this afternoon, Apple rolled out a new section to the store.

It’s called ‘Read Them Here First,’ and it’s essentially a list of magazines that are now available to subscribers days before they come to print, or other digital platforms. And the first featured publisher is Hearst…

The Hearst Corporation is an American-based mass media group, and you’ve likely heard of several of the magazine’s in its library. There’s Esquire, Car and Driver, Popular Mechanics, and Seventeen, to name a few.

TechCrunch has the scoop on its new deal with Apple:

“The exclusive arrangement varies by individual publication in terms of how far in advance you’ll be able to get the various Hearst titles compared to in print and from other online storefronts like Amazon’s Kindle marketplace, but each will be available at least a few days in advance, I’m told. Existing subscribers will get early access, as well as those signing up for the first time.”

This is a big win for the Cupertino company, who’s Newsstand has been struggling to gain traction. Now, with ‘Read Them Here First’ titles, it can show a significant advantage to using its store, versus its competitors.

Not much else is known about the new section right now, so there’s no word if Apple has made a similar deal with another publisher or not. But you have to imagine that, if this goes well, other media groups will sign on.