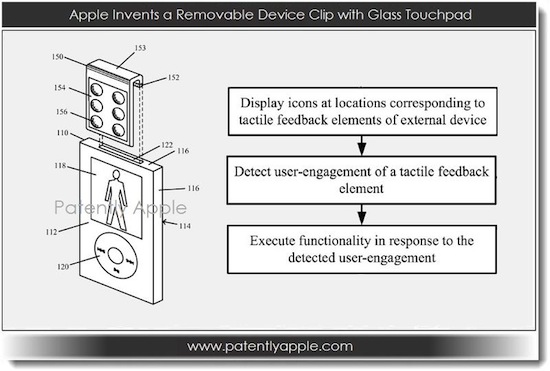 It’s kind of funny that Apple gets a bad wrap for not being innovative enough, because its IP filings tell a different story. The company was awarded more than 1,200 patents last year — which was enough to beat Google, who dabbles in self-driven cars and computer glasses.

The latest testament to Apple’s innovation is a new patent application, which was just published by the US Patent and Trademark Office. It describes a removable clip for a mobile device, such as an iPod, with an integrated trackpad, that could double as a remote control…

PatentlyApple (via MacRumors) points to the filing, which despite the fact that it features what looks to be an older iPod, was just filed a little over a year ago. Product Design Manager Fletcher Rothkopf and Teodor Dabov are credited as the inventors of the clip in the doc.

So imagine this clip that both attaches your mobile device to your belt or shirt pocket, and acts as a remote control for it. It could have a trackpad, or rubberized buttons, that would allow users to perform actions on their device from a distance, or without looking at it.

Interestingly enough, Apple says that the clip can be modified to apply to an iPod, iPhone, iPad, camera, game player, MacBook and — a “convertible notebook.” It’s not clear what that refers to, but, as noted by PatentlyApple, it’s one of the first times it’s used that phrasing.

Unfortunately, as with most Apple patents, we’ll likely never see this futuristic clip materialize in a consumer product. But the filing still provides an interesting glimpse at one of the things Apple has been working on in its super-top secret R&D labs over there in Cupertino.