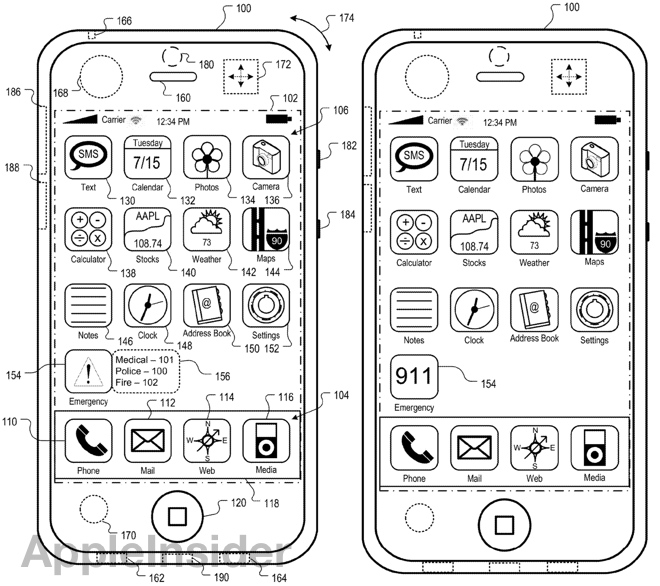 Cue Karl Malden. Stuck abroad without your emergency contact information. What will you do? Instead of turning to the local American Express office, you could consult your iPhone, according to a newly-discovered emergency application by Apple. In a patent application filed when the first-generation iPhone hit shelves, an app could hold local emergency phone numbers and addresses. The proposed app suggests Apple already envisioned its smartphone becoming a storehouse for vital information…

According to patent continuation of the 2007 original:

When a person travels abroad, emergencies can occur. For example, the person can become injured in an accident, be a victim of a crime, or lose their travel documents. In those situations, having knowledge of contact information for local emergency services or the pertinent consular services can be beneficial.

According to AppleInsider, which first uncovered the patent, Apple’s Emergency iOS app would appear as a “drawer” than users could open and then tap on the appropriate emergency service.

The discovery of an emergency contact information app from Apple comes about a month after the FCC approved four U.S. carriers to permit wireless customers to text 911 call centers.

The agreement between the federal government and AT&T, Verizon, Sprint and T-Mobile gives 911 centers until May 2014 to upgrade their systems to accept 911 texts.

By the way, we’ve already discussed how Siri could improve the 911 process.

The FCC sees texting as a way for people to contact emergency responders when a phone call cannot be made or a voice call could put someone in danger.

In one of those ironic moments, Apple’s earlier Emergency app is credited in part to Scott Forstall, the former Apple head of iOS who was ousted following the great Apple Maps controversy.