Apple’s iOS is now the top-selling smartphone operating system in the United States, capturing for the first time more than 50 percent of sales, a new survey finds.

The improvement is the result of repeat iPhone buyers and new smartphone owners purchasing the discounted iPhone 4 or iPhone 4S, researchers say.

Bernstein Research analyst Toni Sacconaghi last week pointed out that a whopping “95 percent of current iPhone users in Europe and North America plan on repurchasing an iPhone now” (via Fortune).

Contrast this with the 75 percent of Android users who plan to repurchase another Android device.

If 25% will churn out of Android, what will they buy?

It should be noted that Kantar’s numbers appear to refute an earlier report by comScore, which indicated Android led with more than 53 percent of U.S. smartphone subscribers, versus 35 percent for Apple.

Superficially, both the comScore and Kantar reports measured the same period in 2012. However, comScore focused on smartphone subscribers while Kantar measures hardware sales that comprise both prepaid and postpaid customers.

While demand for the iPhone 5 remains strong, Apple’s iPhone 4 and iPhone 4S are still popular – particularly with new iPhone owners, according to Kantar Worldpanel ComTech.

The iPhone 5 has been successful this period however we also see that Apple’s older models – the iPhone 4S and 4 have also contributed to the growing share of iOS. This is particularly the case for first-time smartphone iPhone buyers where we see the older models still selling well amongst this group.

In December, one researcher said the iPhone 5 was a smaller portion of overall Apple smartphone sales than the iPhone 4S was when it was first released. The worry is that if Apple is selling more cheaper previous generation iPhones, the company’s profit margins may suffer. 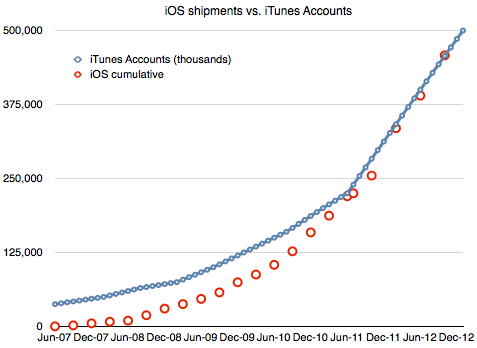 Seeing smartphone competitors achieving similar market scale to Apple’s flagship iPhone model and platform rivals willing to subsidize device sales to build their installed base for lucrative web applications, leaves me skeptical that the high margin status quo approach can be sustained for more than a few more years, and even then, I see inherent margin pressures that are not reflected in consensus estimates.

Of those U.S. smartphone buyers who purchased the iPhone, the largest group (40 percent) picked the Apple device as their first smartphone. The second largest group of iPhone purchasers (34 percent) upgraded from a previous iPhone.

Just a little more than a quarter (27 percent) of the smartphone buyers Kantar sampled bought an iPhone in November after owning another smartphone operating system. For carriers, largely due to the iPhone 5 success, AT&T held on as the top-selling U.S. smartphone carrier.

Verizon was the choice for most first-time U.S. smartphone buyers, according to Kantar. Verizon saw 44 percent of their feature phone owners upgrade to the iPhone, while 38 percent of AT&T feature phone subscribers picked Apple.

Are there any luxury brands with 500 million exclusive clients? Trying to calibrate my snob appeal rating for Apple. — Horace Dediu (@asymco) January 7, 2013

Despite losing its iPhone exclusivity, owners of the Apple device remain loyal to the carrier. More than half of AT&T iPhone owners remained with the carrier for their upgrade. That’s compared to 15 percent of Verizon’s iPhone owners.

What prompted the nearly 11 percent drop in sales of U.S. Android smartphones in November? Is this a trend, or simply a blip?

While iPhone owners have always been loyal to the brand, it’s telling that feature phone owners who’ve decided to upgrade to a smartphone are choosing the iPhone.

Notice, however, that this move is limited (for now) to the U.S. market.

Android is outpacing iOS in areas such as China because the Google operating system is frequently less expensive than the iPhone. The U.S. is less price-sensitive, but more brand conscious, hence the different ranking in America.