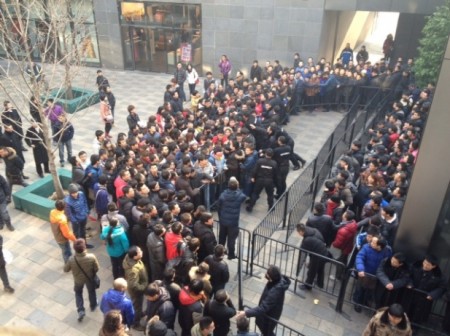 With a whopping 1.1 billion mobile phone users at the end of November 2012, China is the biggest telecom market in the world by subscriber base. And with about 703 million subscribers, state-owned China Mobile remains the world’s largest wireless carrier.

Unfortunately, it’s also the country’s sole holdout when it comes to the iPhone.

China Mobile and Apple have been in iPhone talks for years now, but neither caved in yet. Apple in particular is unwilling to share a portion of App Store sales in China with the carrier. But seeing its 3G subscriber base eroding as a result of not having the iconic smartphone, China Mobile could be starting to need the iPhone more as it finds itself in a position of softening of its tough stance on doing business with Apple…

The telco has been in talks with the Cupertino giant for quite some time about developing a version of the iPhone that could run on its TD-SCDMA network.

AllThingsD passes along a report by Evercore Partners analyst Rob Cihra which highlights the harsh reality: China Mobile’s 3G share dropped by seven percent to 37 percent since 2011. All told, the carrier’s 3G covers just eleven percent of its huge subscriber base.

During the same period, its rivals, China Telecom and China Unicom, have increased their share of 3G subscribers by seven percent to 63 percent.

Perhaps the fact that both China Telecom and China Unicom sell the iPhone while China Mobile does not has something to do with the numbers?

China Unicom alone has added nearly 2 million more 3G subs than China Mobile year-to-date despite being almost 1/3 the size, and overall share losses look to correlate with introduction of the iPhone in Mainland China.

The finding led Rob to conclude that “China Mobile could be starting to ‘need’ the iPhone more”, which of course is awesome news for Apple, whose iPhone is no longer on the country’s top 5 smartphone list.

The conclusion is echoed by Zacks Equity Research analysts who note the carrier will pretty much need Apple’s iPhone in order to fulfill its self-imposed goal of selling a hundred million mobile phones in 2013. Zacks’ report also states that China Mobile is planning to offer Nokia’s Lumia 920T “at a very low cost” in an effort to boost its 3G customer base.

China is the world’s largest Android market and lots of folks in the 1.33 billion people country pick up one of the inexpensive Android handsets or cheap local brands like Yulong Computer Telecommunication Scientific over Apple’s pricey gadget.

The iPhone is costly in China due to a local electronics import tax. For example, a sixteen gigabyte iPhone 5 sells contract-free for RMB 5,288, or approximately $849 versus its $649 price tag listed on the online US Apple Store.

During Q3 2012, the iPhone’s share of shipments to China had dropped below ten percent whereas total smartphone shipments to the country topped 60 million handset units, a sequential growth of 38 percent, per IDC.

With just seven own retail stores in the country, Apple relies heavily on telcos and authorized distributors to push the handset in this massive market.

That China Mobile is seeing its 3G subscribers drop while rivals gain ground is Apple’s powerful bargaining chip in its ongoing talks with the telco.

Is China Mobile finally going to relent and sign up for Apple’s iPhone?