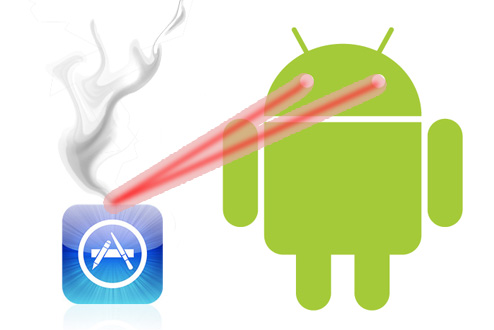 Owners of iPhones and iPads have historically pointed to the App Store’s plethora of quality produce as the reason for the platform’s dominance. It’s always been the reason many have chosen iOS devices over those powered by Android, but things may be beginning to shift in a whole new direction.

While app developers have always suggested that getting Android users to buy apps is an exercise in futility, a new report claims that things are changing, with Android developers now finding a much improved landscape, as revenue from Android devices grows quicker than that of the App Store.

And not just by a little bit, either…

In fact, the statistics are rather startling. App analytics company App Annie has released some figures which paint a very different picture to the one we are all so used to. Gone are the days of iOS developers thumbing their noses at Android. In fact, they might want to swallow their price and start cross platform development sooner rather than later.

So, let’s look at those numbers. According to the report, app revenue on Google’s Play Store grew 311% between October 2011 and the same month this year. In comparison, the revenue from App Store apps grew just 12.9%.

Some may argue that the App Store is simply topping out, and that it already makes so much money for developers that the growth has to end some time. And they’d be right. Even so, it may not be too long before Android apps become a much more tempting proposition for iOS developers than they have in the past. After all, if money is there to be made, they’d be mad not to take it.

If it’s good enough for Instapaper, it’s good enough for anyone, and here lies another of the reports findings. Predictably, there are just two main ways of making money out of mobile apps, and they are wildly different. Some developers go the route of releasing dozens upon dozens of cheap or free, ad supported apps across all platforms. We’re looking at the likes of Zynga here. Others like Instapaper’s Marco Arment take the more quality-driven approach, preferring to get things right the first time with one or two quality apps. While both approaches work to some extent, we know which we prefer.

Other tidbits to come out of the report include the fact that Zynga was the only company to make the Top 10 list of both iOS and Android, while Japan appears to be something of a cash cow for Google’s platform. Predictably, the United States falls second for iOS revenue, with the rest of the world sitting in top spot. Turns out there’s a lot of people living outside of the US folks!