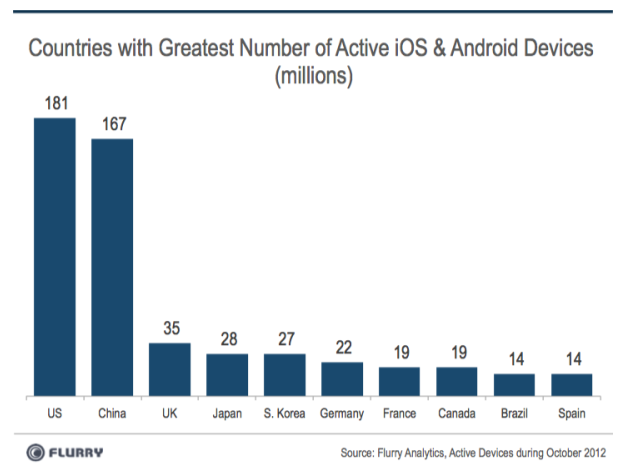 If the global picture of mobile devices were a soap opera, it would be called “As the World Turns”. A constant stream of numbers show how demand and usage is shifting away from the U.S. and to China. The latest figures show the Asian country will soon top the United States with the most active iOS and Android smartphone users.

While China’s 167 million iOS and Android users currently puts the nation slightly behind the US at 181 million, that ranking will change in early 2013 as China’s triple-digit growth rate easily outpaces America’s maturing smartphone market, according to a new report released Wednesday by a mobile analytics firm…

According to Flurry Analytics, China added 125 million iOS and Android devices since October 2011. That compares to 55 million active devices added in the US.

China has a 293 percent growth rate in iOS and Android devices added between October 2011 and October 2012. US growth is not even on the chart, crowded out by Vietnam’s 269 percent growth, Columbia’s 260 percent increase. 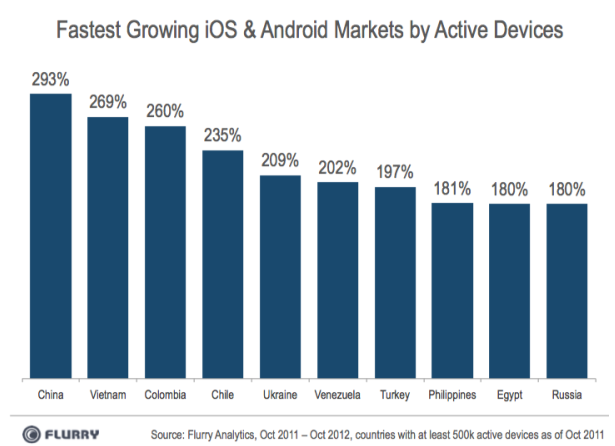 “The U.S., it seems, is nearing smartphone saturation, as growth in other countries explodes”, explains TechCrunch.

The enormous growth of smartphone users in China could account for the rush of smartphone makers to sell to new users. As we reported earlier today, Apple controls 71 percent of tablet sales in China. But there are other signs in the Flurry report illustrating how the importance of the US is fading while international markets increasingly adopt iOS or Android devices.

The data seems to show that the areas of the world which first were introduced to the iPhone, iPad and Android are now the most mature. 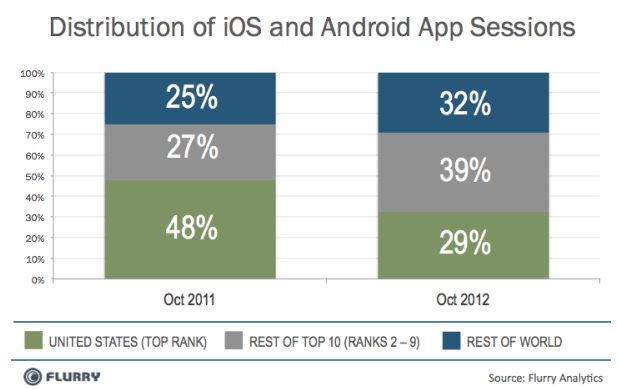 While the US has 181 million iOS or Android devices, the numbers fall off a cliff when it comes to Europe. The UK is in third place with 35 million devices. Germany has 22 million, with 19 million for France.

For consumer electronics, the world is changing. Where once, companies would introduce a product overseas, perfect it and then release it in the US, America is now where ad blitzes take place, lines at Apple Stores are filmed and buzz is generated.

Profits come from outside the US, where consumers hungry for Western-style devices snap up items. Apple, created in America’s Silicon Valley, now sees China as its most profitable market.

As iOS use migrates to China and elsewhere, what do you think the role for the US and Europe in Apple’s future will be?