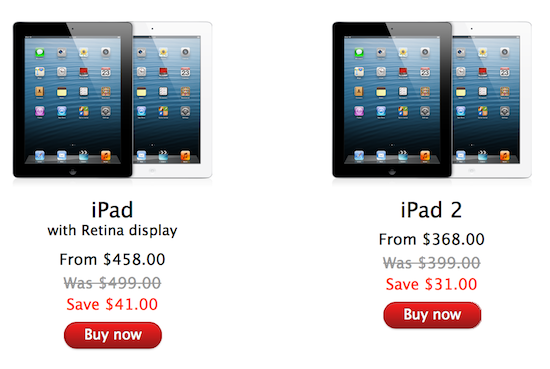 Ok folks, Apple’s Black Friday sale has now officially begun here in the US. After being down for several hours, the company’s Stateside online store has returned with discounts on several popular products.

As usual, the price cuts are modest. But for a company that rarely puts its products — particularly current gen models — on sale, it’s a fairly big deal. We’ve got all of the best deals and details after the fold…

As you can see in the above image, fourth generation iPads are at least $41 off, depending on the model. And the 16GB Wi-Fi iPad 2 has been knocked down to $368. Here are a few other noteworthy discounts:

Apple has also taken $101 off of all of its current-gen MacBooks, and has discounted a number of accessories like the Airport Express Base station and its Magic Mouse.

Again, the discounts are fairly tame. But we noticed that it beat out MacMall’s deals on several products, including the fourth generation iPad. So you may want to do some comparisons before you buy.

Apple’s Black Friday sale will only last 24 hours and all deals are subject to available supplies. So if you’re interested, head on over to your online store, or your local retail store. The discounting stops at midnight.