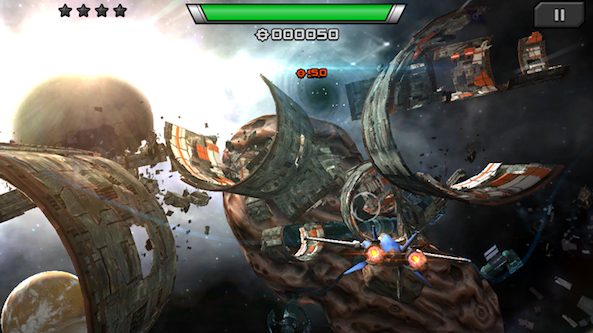 Since first reading about Psyonix’s ARC Squadron many months back, I constantly tracked its preparation for launch. The new flight shooter released last Thursday will dominate your favorite iDevice utilizing the Unreal Engine to provide an immersive user experience. Typically, I try to review an app or product without intentional comparisons to other similar products and solely base the merit of the subject on its own qualities. However, it is impossible to not mention Star Fox when talking about ARC Squadron. The new flight combat app is one of the most immersive games I have tested and am happy to report it has earned a top spot on my Springboard…

Beautiful. Crisp. Clean. Daring. This is one of the first games I have played on an iOS device that truly felt like I was playing a console game. Despite the fact that your finger does the flying instead of the controller, the graphics, controls, and even soundtrack and sound effects push iOS gaming to the edge. The colors, eruptions, light effects, and graphics are eye candy on an iPhone 5 and certainly on the iPad‘s Retina display. The game is universal which prevents having to pay double for twice the enjoyment. Frustratingly, however, the game will not sync between devices, meaning if you complete a bunch of levels on your lunch break via iPhone, when you get home to your iPad, get ready to repeat your progress. 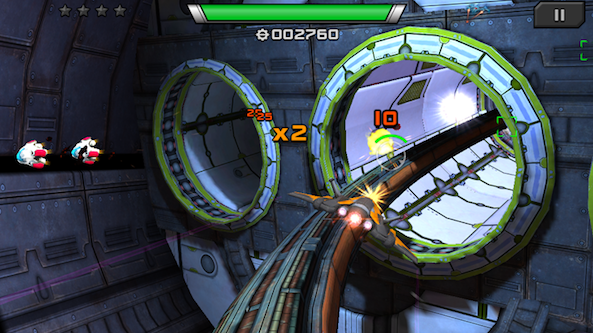 At its core, the game is an A-to-B flight combat explosion. The speed is set by the track of each level and the boundaries only allow movement within a given range. However, the flight path presented is 3D within those given parameters and often require precision flight around moving objects such as asteroids, laser fences, and debris. Multiple galaxies and ever-changing environments keep the game exciting throughout, which is important as it boasts 10 hours of gameplay, a 64 level campaign, twenty unique environments, and six upgradable ships.

Pausing for a brief paragraph on graphics is in order. Certainly, games like Infinity Blade II and Horn push iDevices to the max and there is a new contender to the ring. I fully anticipate ARC Squadron will be a game upon which future games are measured. Being featured in Apples “New and Noteworthy” section is hopefully only the beginning of the accolades for the new flight shooter. 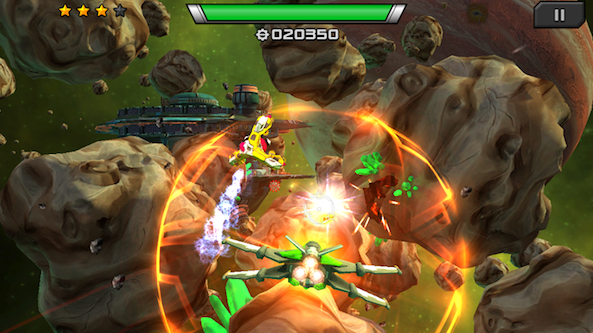 Before blasting out into space, the flight instructor walks you through a few drills, the basics such as flight path, barrel rolls, targeting and health regeneration. Most importantly, firing on enemies is simplified by using a finger to point the nose of the aircraft and consequently the targeting reticle on the desired object. The plane will fire automatically when pointed in the correct direction. A machine gun is standard, but through the game’s upgrade system, planes, skins, and weapons are all upgradable after collecting points during missions.

Intuitive controls fly the plane through a myriad of obstacles and make or break the user experience. The graphics are amazing, but without proper control of the plane, ARC Squadron would be useless. As viewed in the gameplay video below, the plane is maneuvered by touching anywhere on the screen, reacting to movements, taps, and swipes. Reaction is instant, but not always quick. Consequently, I play the game with the sensitivity on max to ensure the plane moves as quickly as possible to slight variations.

Over the past few days, I have been getting better with the controls, but would really prefer for the plane to react even more intently to my movements. For example, when I play with my iPad, I hold it in two hands, controlling the plane with my right finger. By swiping my thumb left, even very quickly, the plane will not sweep all the way across the screen, causing me to double swipe, often missing targets or fast moving collectables. The game is seemingly meant to be played as demonstrated in the video, with the index finger below the flight path of the plane. I am hoping an update in the near future will increase the sensitivity or give users the option to turn on thumb controls such as a simulated joystick on either side of the screen.

ARC Squadron is an absolute must-have for the serious and casual iOS gamer, even at $4.99. With 10+ hours of vicious gameplay and upgradeable aircraft, weapons systems, and skins, this universal app will keep you invested. Although it weighs in at a hefty 311MB, it is completely worth the size considering all of the campaign levels, unique environments, and multiple ships and upgrades. Despite my pickiness about the controls, the game is a no-brainer download. Mix the epic gameplay with the stunning, Retina-ready, graphics and this game is destine for a top spot on the charts.

What is your favorite part of this new AAA quality iOS game? Will you be headed straight to the App Store to pick it up or do you have another flight combat preference?