Carrier AT&T, which had a multi-year exclusivity on iPhone sales in the United States, this morning posted its third-quarter earnings, reporting it activated 4.7 million iPhones, representing more than three out of four smartphones activated on its network during the quarter. The number represents approximately a 178 percent increase over the year-ago quarter, when it activated 2.7 million iPhones.

The company in total activated 6.1 million smartphones in the third quarter. Of the 4.7 million AT&T iPhones, 18 percent went to new customers as the carrier, like everybody else, was struggling to meet pent-up demand from the existing subscribers amid the widely reported iPhone 5 supply constraints, which AT&T said affected its postpaid performance as well…

According to a media release accompanying the announcement, AT&T counted a total of 44.5 million smartphones on its network at the end of the third quarter of 2012. It also achieved a net gain in wireless subscribers of 678,000 and about 5.2 million over the past year. 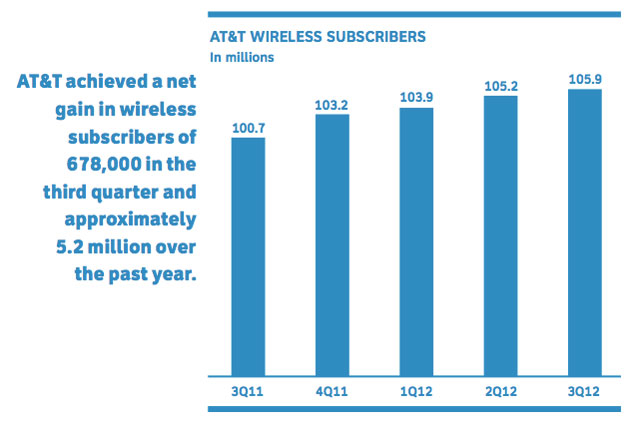 AT&T attributed poor postpaid performance to the impact of constrained inventory of the iPhone 5:

Postpaid results were impacted by iPhone 5 inventory constraints which resulted in the vast majority of third-quarter iPhone sales going to existing customers, where there was considerable pent-up demand. Prepaid net adds were 77,000, connected device net adds were 313,000 and reseller net adds were 137,000.

The carrier recorded “record sales quarter” for Android and Windows smartphones as well, though it remains primarily the iPhone company.

As for AT&T’s Mobile Share plans launched on September 23, the carrier said that nearly two million customers signed up for these since. As you know, AT&T became a target of harsh criticism when it decided to block FaceTime over cellular for new customers unless they sign up for the pricey shared plans.

Verizon last week posted its Q3 earnings, reporting sales of 3.1 million iPhones with nearly one out of each five smartphone sales being the latest iPhone 5, or approximately 650,000 units. Verizon activated 6.8 million smartphones in the third quarter and Android devices accounted for 3.4 million smartphone activations.

Sprint will report its earnings on Thursday.

Apple tomorrow is scheduled to report its earnings for the September quarter, which will include opening weekend iPhone 5 sales that topped five million units.