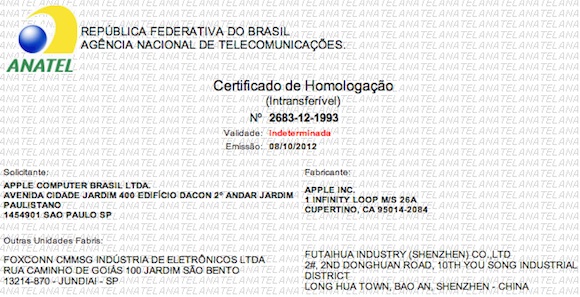 In addition to this morning’s story that the iPhone 5 will launch in India at the end of the month, another report has surfaced regarding international availability of Apple’s latest handset.

The report claims that Brazil’s telecommunications regulatory authority has just approved the iPhone 5 for sale in the country. And word is, Siri has learned how to speak Portuguese…

“MacRumors has learned that the iPhone 5 has been approved for sale in Brazil by Anatel, the country’s telecommunications regulatory authority. The approval was posted yesterday with Foxconn’s factories in Brazil and China listed as assembly locations, but there is not yet any word on when Apple plans to launch the device in the world’s fifth most-populous country of nearly 200 million people.”

More interestingly, the site points out that the handset’s Brazil-specific user manual, which was included in the filing, contains evidence that Siri may soon support the Portuguese language.

There’s a section in the handbook that covers acceptable input phrases for Siri, and previously, the examples were only shown in english. But now they are in the country’s native tongue.

Apple continues to improve international availability with each new product, and it’s on a tear with the iPhone 5. The handset should be for sale in more than 100 countries by mid-December.