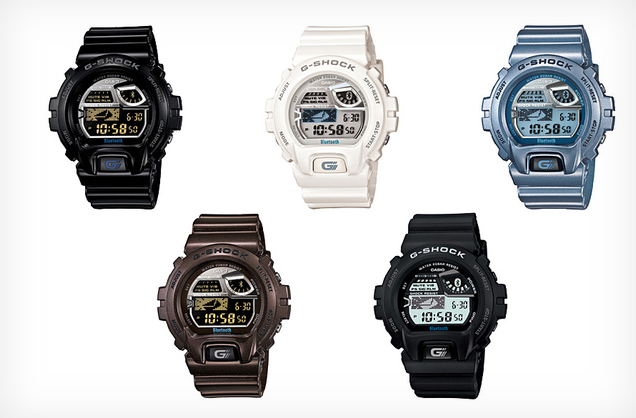 One of the latest accessory crazes to hit the mobile industry are smartwatches — wearable computers that share data with smartphones. There’s the Pebble, the Meta Watch, and now Casio has one.

Casio announced a new addition to its G-Shock line today — arguably one of the most recognizable wristwatch lines in the world. It has built-in Bluetooth, and can talk directly to the iPhone…

From the press release, via The Verge:

“The G-SHOCK line of watches is always evolving in terms of technology and performance innovation. This time, G-SHOCK has taken another step forward by incorporating Bluetooth v4.0 into this new model, which features the round-shaped design popular in the G-SHOCK brand around the world.

This new watch communicates with the iPhone to perform various functions such as notifying the wearer of incoming calls and enabling iPhone alarm and vibration functions from the watch button. In addition, the watch can automatically adjust itself to exact time according to different time zones by synchronizing itself to time data received from the iPhone.”

Casio says that the watch uses low-power bluetooth 4.0 technology — which is also built into the iPhone 4S. And with the accompanying iPhone app, it can receive notifications of incoming calls, control iPhone alarm and vibration functions, and let the wearer know when the iPhone is out of range or left behind.

Admittedly, the features on this watch are child’s play compared to what the Pebble and some of the other smartwatches can do — control iPhone’s Music app, receive text messages and other notifications — but that simplicity, along with strong brand recognition, may end up working in Casio’s favor.

The company says that the G-SHOCK GB-6900AA will come in 5 colors, but there’s no information on pricing and availability for the US yet. It does, however, go on sale in Japan in October for around $230.

So, what do you think of Casio’s new iPhone-friendly G-SHOCK?