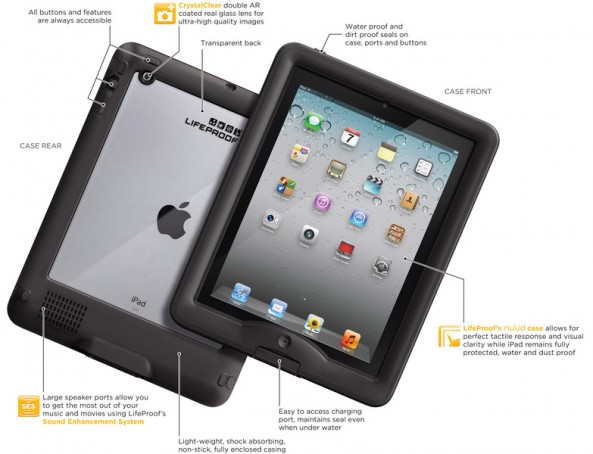 In search of a new iPad case? You might want to check this out: LifeProof, the company behind the popular rugged iPhone cover, has just released a new case for Apple’s tablet.

Dubbed the nüüd, the case is thin and doesn’t feature a built-in screen protector. But somehow, the developers still managed to make it water, shock, dirt and snow proof…

LifeProof says that the nüüd is every bit as tough as its iPhone counterpart. It can be fully submerged in water down to 2 meters. It can withstand drops from up to 4 feet, meeting military drop specs. And it meets IP-68 standards for dirt and snow protection.

But you shouldn’t have to sacrifice usability for durability, so LifeProof designed the nüüd to be as unobtrusive as possible. There’s no screen protector to dull the iPad’s touch responsiveness or display quality, all ports and buttons are accessible, and the sound from the speakers is actually channel through the case cavity for fuller, richer sound. Wow.

Of course, all of this awesomeness is going to cost you. The LifeProof nüüd will run you a steep $160. But if you tend to use your iPad in rough environments, it may be worth it. If you’re interested, you can find the case on LifeProof’s website.

What do you think of the nüüd?