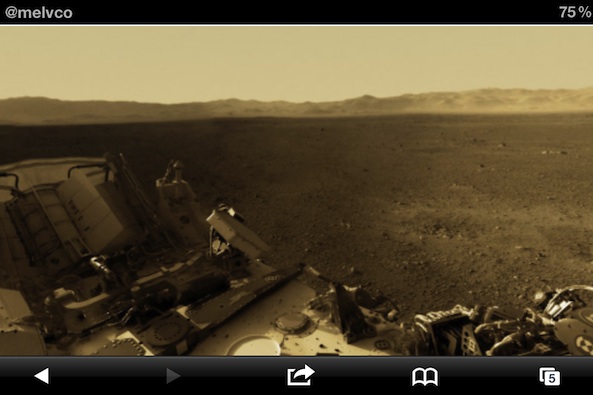 Last November, NASA launched a car-sized vehicle into space called the Curiosity rover. Earlier this month, that vehicle landed in the Gale Crater on Mars. And if that’s not enough to blow your mind, check this out.

The Curiosity rover has been sending detailed pictures of the red planet back to NASA throughout its travels. And you can actually view these photos in an interactive 360-degree panoramic image on your iOS device…

The image was stitched together by panoramic expert Andrew Bodrov, and uploaded to 360cities. It’s entitled “Curiosity rover: Martian solar day 2,” and can be viewed on your desktop computer, iPhone or iPad. 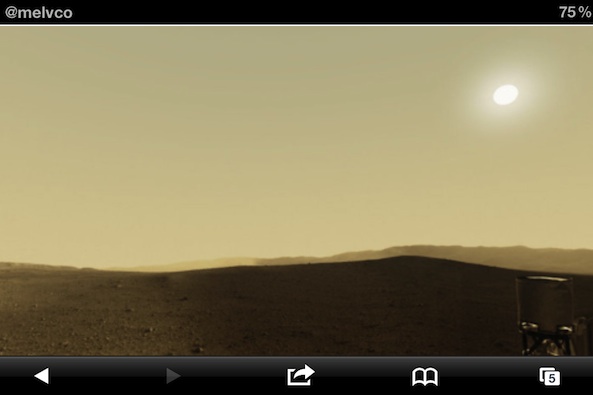 Looking at the 360-degree image, as aforementioned, is mind-blowing. Here is this planet that’s more than 100 million miles away from Earth, yet it looks so familiar. It looks like you could get out and walk on the rock-covered ground. And there’s hills on the horizon, and the sun’s in the sky — it’s very surreal.

If you’re viewing the photo on your iPhone or iPad, try tilting the device from side-to-side; the 360-degree view reacts to the built-in gyroscope. You can also drag your finger along the image to manually explore the martian planet. And of course, pinch-to-zoom works as well.

Have you tried it on your iOS device yet? What’d you think?