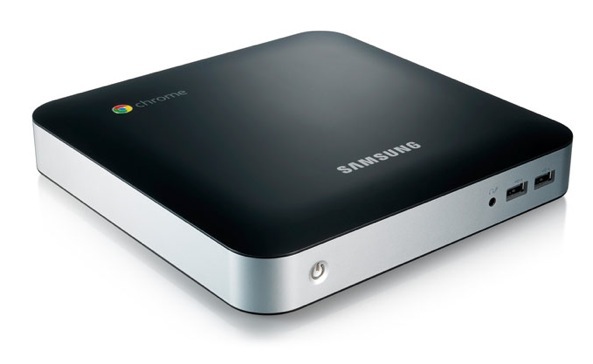 Amid the epic Apple v. Samsung legal fight over mobile devices, it’s easy to overlook other cases where an argument could be made that Samsung looked to Apple’s design language perhaps too closely in order to make its gear more pleasing to the eye. Enter Samsung’s Chromebox Series 3, a $300 computer running Google’s Chrome OS.

The computer comes packaged in an enclosure which bears uncanny resemblance to Apple’s Mac mini, down to the exact 7.6-inch-square footprint, rounded corners and silver rim, which in Samsung’s case is made of painted plastic instead of aluminum. Of course, you’re free to argue I’m stretching it, but first take a look at the comparison images right after the break…

Apple should be flattered. Either that, or it should be readying its army of lawyers. Samsung’s Chromebox looks very much like a Mac mini, with the exact same 7.6-inch-square footprint, rounded corners (using a smaller radius) and silver rim (made of painted plastic instead of aluminum).

For reference, this is Apple’s Mac mini which debuted in 2005.

Another side-by-side look at the two machine’s back ports (Mac mini is on the right).

Samsung unveiled that Chromebook Series 3 back in May of this year.

Granted, there are only that many ways to create a mini computer featuring a small footprint and rounded corners. Still, undoubtedly some will observe that the similarities once again are too obvious and striking to be dismissed as trolling, especially in light of the ongoing high-stake trial.

Would you say that Samsung ripped off the Mac mini or are you calling BS on this one?