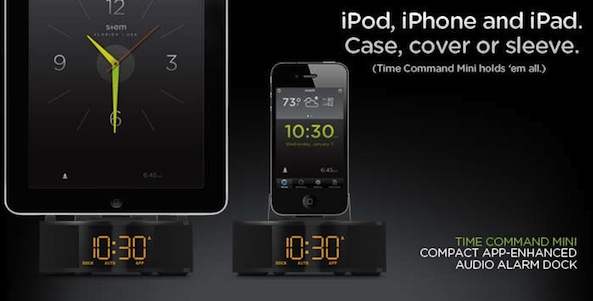 There is a lot of competition out there in the dock world and many of them simply play music, charge your iDevice, and get in the way due to their bulky form factors. Stem Innovation is here to challenge the status quo with their Time Command Mini, which is not only a dock, but also an extension of your iDevice, thanks to the timecommand companion app…

With a small, round, and short design, the Time Command Mini is reminiscent of a hockey puck, though slightly larger. It easily rests on a nightstand or end table without causing too much commotion and even has a pivoting 30 pin connector to ensure proper fit while your iDevice dons its favorite case. Naturally, the dock has two speakers, which easily fill a small room, but sound slightly distorted at maximum levels. I also noticed when the volume is changed from the dock, the volume indicator fails to change in the Music.app.

The three-button control system is simplistic although almost nonsensically: setting the time requires a seven step process and setting an alarm is ten! If you are interested in the details, check out the user guide. However, in modern times, apps rule the world and timecommand separates the Mini from the rest of Old MacDonald’s farm. 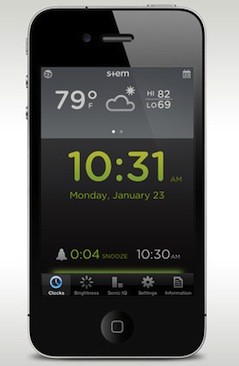 The timecommand app is very much an extension of the Mini and certainly adds to the limited abilities of the dock. Just to name a few enhancements, timecommand offers six background designs, displays local weather and selectable 3+day forecast, a simple music player, alarm tones and repeated scheduling functionality, controls iDevice and dock display brightness during sleep mode, manages increased volume alarms, monitors snooze times, and plays several natural relaxation scenes with a sleep timer. All of those advanced features are great, but the one that impressed me the most was actually the most simple. The Mini automatically sets the dock time when the iDevice is placed for the first time! Maybe I’m easily amused.

Clearly, without the app, the Mini is, well, just a dock. It is nice to have the more complicated features of an alarm clock tucked nicely in an app, as the controls are arguably easier to manipulate with a graphical interface. However, the one draw back is firmware. Since I started playing with the Mini, I get an alert that nags me for an update.

I greatly appreciate our friends at Stem Innovation for sending over a Mini for this review. If you are in the market for a sound dock, consider overall functionality as an important feature. The varied control system Stem offers should raise a few eyebrows in the dock world and, at $79.95, will lighten a few wallets. However, Stem Time Command Mini does offer the fully loaded companion app at no additional charge. Next time you stumble across a long list of docks, ask yourself, “what else can it do?” I assume you will be hard pressed to find a similar product with such a long list of features.

Do you have a favorite dock for your iDevice?