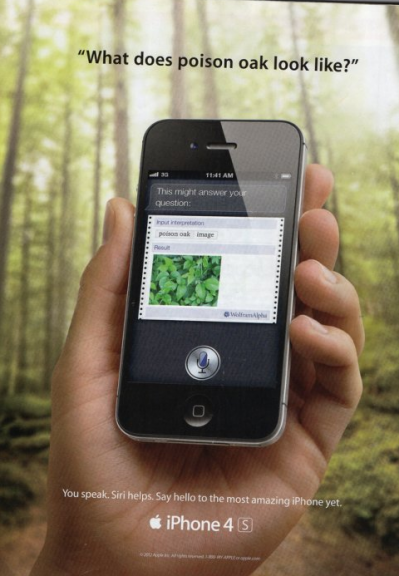 If you’ve used Siri in the past, you know how reliable, or how unreliable it can be. For someone like me who speaks with a strong French accent, Siri gets it wrong more often than not, which led me to use Siri for very basic tasks instead of trying to push her limits.

If there is one time where Siri should be right on spot though, it’s during commercials or ads. But there again, it seems like Siri, or rather Apple marketing department, isn’t on top of its game.

In a recent ad placed on the back cover of the Economist, Siri was asked “what does poison oak look like” and she managed to return the wrong results…

Botanist and director of the Chrysler Herarium at Rutgers University, Lena Struwe knew there was something wrong when she first saw the ad.

“I saw the ad,” says Struwe, “and I said, ‘This doesn’t look right.’ I sent it to the botanist community, which led to a discussion. And it turns out it’s poison ivy, not poison oak.”

Turns out this ad is actually showing a picture of poison ivy, the same picture that can be found on Wikipedia’s page about toxicodendron radicans, aka poison ivy.

As a matter of fact, if you ask Siri what poison oak looks like, her best answer will be to show you results for pacific poison oak. 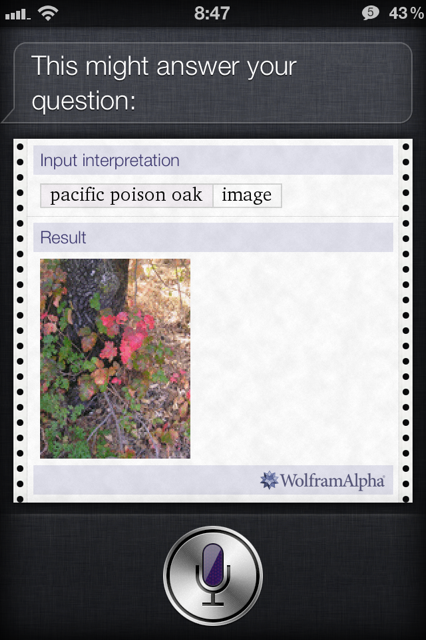 This gross error in the ad is neither Apple’s or WolframAlpha’s fault. It’s Apple’s ad agency’s. At the end of the day it’s not a big deal, but Apple sure could have done a better job at checking the work of their ad agency.

Next time you’re stuck in the middle of the forest, maybe it won’t be such a great idea to ask Siri about plants after all. But who am I kidding, she’d probably reply that she’s unable to connect to the network anyway.