But even a mere idea of Apple setting its sights on the television market has baffled incumbents undertaking precautionary measures.

As indicated in a report out of Asia yesterday, some makers have started making smart TV alliances out of fear that Apple might take the television market by surprise just as it’s done with the music market and, to a certain extent, with high-end smartphones…

Julian Ho filed a report with DigiTimes, writing that display system providers TPV Technology and LG Electronics and China-based TV brand Changhong are said to either be forming alliances with one another or are seeking out additional partners for smart TV alliances.

The sources said the alliances are also forming as Apple is preparing to release a smart TV. Due to Apple’s influence in the market, the sources fear it will further dominate the smart TV market, which is estimated to reach a 40% penetration rate by 2014.

These TV makers also want to catch up with Samsung, whose smart TVs lead not only in terms of industrial design, but also with features like apps, Internet access and digital media. 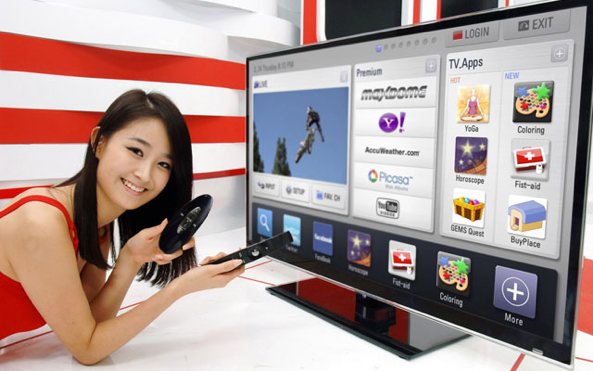 It is interesting that TV makers are bracing themselves for an Apple television set that many technology watchers dismiss as a product that won’t make an impact because it’s a cut-throat business with razor-thin margins and long upgrade cycles.

Those same people cited exactly the same reasons when an Apple-branded phone had been mulled. Then the iPhone came along and turned the industry upside down. Other people argue that Apple doesn’t need a full-blown TV set, pointing at its $99 Apple TV set-top box.

The problem with both arguments is that a) Apple re-branded itself at the January 2007 iPhone introduction as a consumer electronics company so a bad-ass Apple TV set is a no-brainer, and b) ordinary consumers hate set-top boxes and will want to buy iTV as it would assumably change their preconceived expectations of what the TV can do.

Steve Ballmer famously laughed at the iPhone because, in his view, it debuted as “the most expensive phone on the planet”. Yet, the iPhone quickly picked up steam and has gone to become the best-selling phone.

Here’s Walter Isaacson telling he left out some juicy details out of his book, including “what Steve Jobs thought the next Apple TV should be” (about 57 minutes into the interview).

Finally, I can confirm independently that multiple sources from the television industry told me a while ago that they’ve taken an Apple television set for granted.

I’m talking about companies that have access to industry data and know way more than me about what’s going on behind the curtain. These sources left no room for misinterpretation and were adamant that an Apple television set is a question of ‘when’, not ‘if’ (and Gene Munster agrees).

These industry executives seem to be expecting Apple’s entrance into this space with a combination of excitement and anxiety bordering on sheer fear. Make no mistake, TV makers are very well aware that the iTV – if done right – might easily reinvigorate the struggling HD TV business and threaten their existing business models.

I’ll just leave it at there, but you’re welcome to add up to the conversation down in the comments.