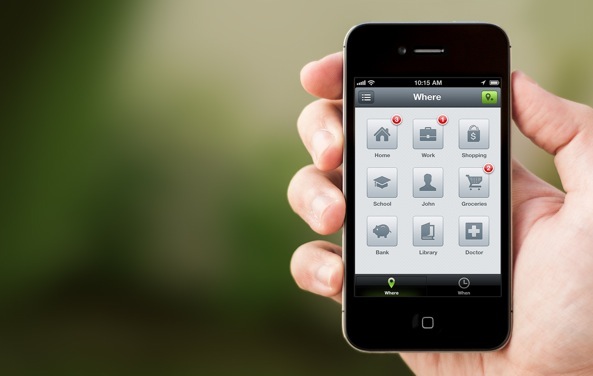 We told you about Checkmark, Snowman’s upcoming location-aware organizer app for the iPhone, earlier in the month. Today, the program has finally landed on the App Store and can be yours in exchange for 99 cents. Checkmark bests Apple’s stock Reminders app on many levels while ticking all the important boxes.

It one-ups Apple with triggers based on both location and time so you can, say, be alerted to pick up your laundry half an hour before you get to the mall or have that reminder about calling your wife pop up 15 minutes after you leave work. And if Reminders’ illogical and inefficient user interface isn’t your cup of tea, you’ll definitely fall in love with Checkmark…

Checkmark also beats Reminders in user friendliness, timed location reminders, advanced features and efficient performance that won’t take nearly as much of a toll on your battery as Apple’s software.

As I mentioned before, you can set a trigger by the clock or location.

Perhaps most importantly, location-based alarms in Checkmark don’t miss a beat and go off precisely when you’d expect them, unlike Apple’s unreliable program.

Timed location reminders are particularly useful as you can set the alarm to go off, say, 15 minutes after you arrive at the location.

You’ll also love how Checkmark sorts tasks by distance, letting you view a list of the things you need to do within a certain radius. You can also set a specific radius when creating a new location in Checkmark.

Plus, an alarm’s location can be set by using your current location, a contact’s address or by dropping a pin manually on a map. The lack of manual locations in Apple’s Reminders is one of the major reasons I eventually stopped using it.

See, I typically want to add a location-based reminder spontaneously. Unfortunately, Apple’s Reminders stubbornly insists on using previously saved locations from my address book. Who on Earth wants to pollute their contacts with location entries for stuff like the favorite shopping places, cinema theaters, a baseball stadium and what not? Checkmark’s ability to drag a pin on the map to set the alarm’s location is Godsent. 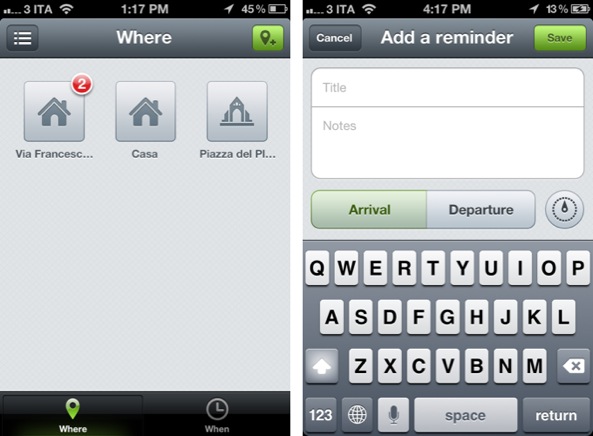 That’s why Apple’s offering falls short badly in usability and why Checkmark shows Apple who’s who and how a well rounded reminder app should be done.

Reviewers seem to be liking Checkmark a lot.

Matthew Panzarino wrote in his review over at The Next Web that Checkmark is what Reminders should have been:

The idea of Reminders was always cool. Using the location-based features of the iPhone to trigger when you entered or exited a ‘geofenced’ area feels like the future. But, in practice, it never quite worked out.

And the Siri integration of Reminders just hasn’t been good enough to justify using it to remind me of things because, in the end, the shortcomings of the app itself make it near useless.

I was using Checkmark beta for some time myself and also felt it put Apple’s app to shame. Panzarino summed it up nicely:

I’ve been testing Checkmark during its beta period for some time and, I’m not ashamed to admit, was skeptical that it would be much better than Reminders has. But after taking it for a serious spin, I can say that it really makes you see how sweet a location-based alert app can be.

So, if you loved what Apple was trying to do with reminders, but want an app that actually works the way it says it should, give Checkmark a try.

I take it we can all agree at this point that Apple’s Reminders app is an unreliable, battery-taxing piece of code which could be a lot more user friendly. 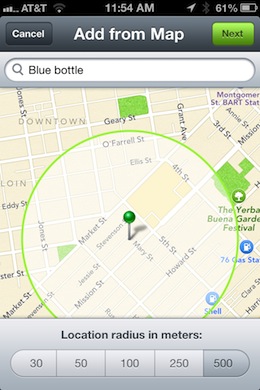 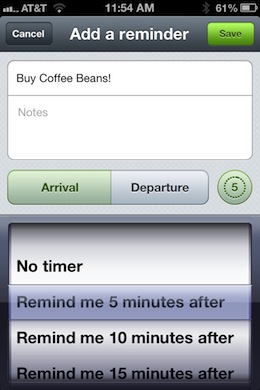 MacStories editor Federico Viticci praises Checkmark’s efficient interface. He notes you can add a reminder in Checkmark in only three taps as opposed to ten taps in Reminders:

My favorite feature of Checkmark is its streamlined way of adding new location reminders. From the main “Where” screen, you can tap on a location to view all the reminders associated with it; tap the + button in the upper right corner, and create a new one with a title and (optional) notes.

Set arrival or departure — depending on whether you want to be alerted when you arrive at a place, or leave it — and hit Save. Done. Unlike Apple’s app, it takes me 10 seconds to set up a new location reminder in Checkmark.

Checkmark isn’t just a prettier Reminders app, it is a better take on a concept that Apple first explored but somehow failed to properly implement on iOS.

On the downside, the initial release of Checkmark doesn’t have recurring reminders, which is a bummer, it won’t sync with Apple’s Reminders and it doesn’t support iPad (yet) so its reminders won’t show up on your tablet (or desktop, for that matter).

If you wanted to use Apple’s Reminders to free up your calendar from the small errands, but gave up because it was fugly and ate up juice quickly, I wholeheartedly recommend Checkmark.

Of course, Apple’s Reminders may eventually catch up. It comes free with iOS 5 or later and will soon be available on Macs with Mountain Lion and on the web via iCloud.com.

I’d just bought Checkmark before getting to write this post.

Fifteen minutes in and Checkmark made me fall in love with reminders and geofencing all over again. It’s definitely replaced Apple’s horrendous app on my home screen.

Is Checkmark what Reminders should have been in the first place?