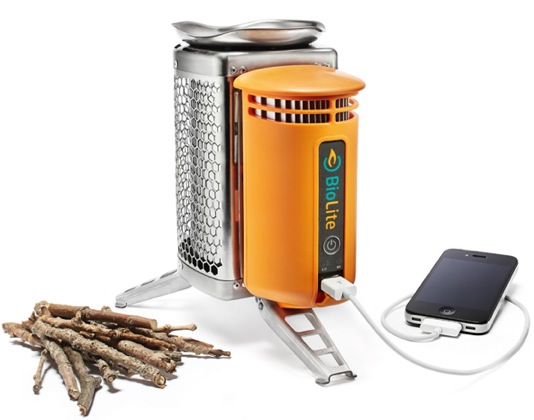 Say what you will, but all day long performance is a pipe dream with today’s power-hungry iOS devices. Because these are mini computers, iOS devices require lots of juice to run. Unfortunately, space constraints and today’s battery technology just can’t keep up with the realities of mobile computing (yet).

Folks tackle the problem with battery packs, but that’s just another item to lug around while out and about. And guess what, a battery pack is one item that routinely gets forgotten in my camping preparations. But I never forget a camp stove.

Enter BioLite’s CampStove, an awesome new ‘accessory’, basically a special camp stove which lets you burn stuff –  be it wood and pine or twigs and leaves or other bio mass – to convert heat to energy via its built-in thermoelectric generator, so you can charge your iPhone, iPod touch or iPad. The campfire will never be the same. A cool promo video follows right below…

Matter of fact, it’ll charge whatever mobile device you have at hand via a USB port. Burning stuff apparently produces enough heat to provide the same amount of power as a notebook’s USB port, meaning two watts of power at five volts. Here’s your promo clip.

Of course, by using renewable resources for fuel instead of expensive, polluting petroleum gas, you’re reducing your carbon footprint. Oh, and you can use it to fix yourself coffee or tea, too, as it only takes five minutes to boil 1 liter of water.

You’ll also love its modern design comprised of clean lines and the combination of stainless steel, aluminum and orange plastic. It’s 8.25-inches tall, 5 inches wide, weighs in at about two pounds and available for pre-order for $129 over at the BioLite webstore.