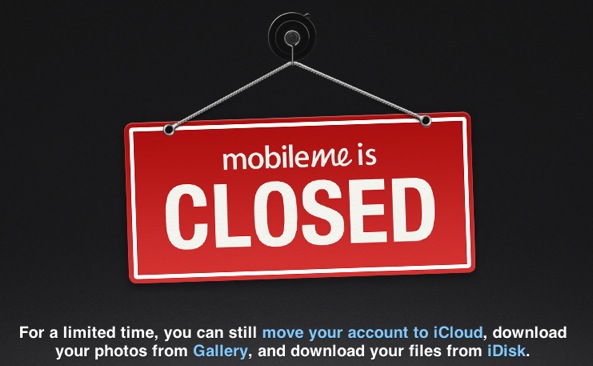 Following numerous warnings that it would discontinue its paid online services suite dubbed MobileMe, Apple issued the final warning a month ago. Cupertino said it would shutter the service July 1 and advised users to download all their files and image galleries and transfer their MobileMe accounts to iCloud, a replacement and free of charge service.

So we were a little surprised that Apple didn’t take down MobileMe on July 1. Instead, the company gave abandoned MobileMe users an extension. A new disclaimer on the website now informs users they have “a limited time” to transfer all their stuff to their computers or iCloud accounts…

We first heard MobileMe would be shuttered last summer, when Apple began pitching the new iCloud service heavily. By the way, that’s some nice graphics on the MobileMe website (you gotta check out the animated closure sign).

Apple also published a support document explaining how to migrate MobileMe albums and photos to your Aperture library, a feature also available “for a limited time” only.

MobileMe users who haven’t migrated to iCloud yet can continue using the site to find their lost devices using Find My iPhone. Transitioning your MobileMe data to iCloud is a one-click affair from the MobileMe web interface.

I’ve got a confession to make: I was one of a few hundred thousands who forked out hundred bucks a year to enjoy the slow and unresponsive webmail, calendar, contacts, cloud storage and other MobileMe services.

Remember MobileMe woes and how Walt Mossberg called the service a dud in his review? And how the media rechristened MobileMe as MobileMess?

On the other hand, if it weren’t for the unsuccessful MobileMe launch and subsequent woes that tarnished the Apple brand, I doubt the company would learn their lesson and rectify all that was wrong with MobileMe in time to serve hundreds of millions of iOS device owners..

Imagine a mess if Apple dropped the ball with iCloud now that iOS user base has ballooned to nearly 400 million devices in the wild.

Have you ever used MobileMe?

And do you use a free iCloud account to sync your devices?