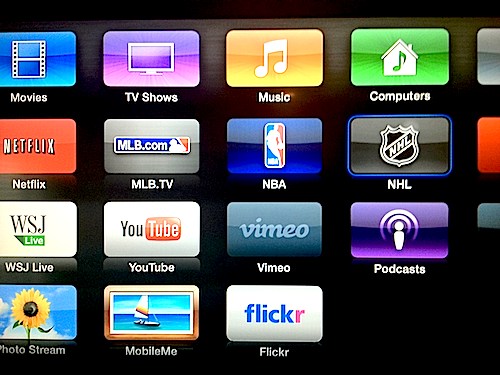 Earlier this morning we told you about a note by Apple pundit John Gruber who challenged BGR editor Jonathan Geller’s false report that Apple would release a software development kit for the Apple TV at WWDC, effectively opening up the $99 set-top box to third-party apps.

The rumor never came to be and Gruber noted in his trademark style that “something big is going on with Apple TV in Cupertino” (but it’s still being cooked, if I may add). An interesting new video evidence released today by the Brazilian blog MacMagazine has strengthened the belief that third-party apps are likely coming to the Apple TV…

How’s this, you ask.

Well, why else would the latest beta of the iOS 6 software for the Apple TV software let you reorder the icons on the main menu page?

This is achieved by long-pressing the center Apple Remote button while a desired icon is highlighted. This makes the main menu icons wiggle, like the home screen icons on your iPhone or iPod touch.

You can then move the currently selected icon using the directional buttons on your Apple Remote, which makes other icons automatically reorder in a fashion akin to other iOS devices.

Granted, you could dismiss this as just a welcome tweak to allow for the organization of the main menu icons. On the other hand, Gizmodo’s Sam Biddle notes that “it’s exactly what we saw right before downloadable iPhone apps”.

Looking at the big picture, however, I find it hardly believe that Apple would leave the Apple TV out of the third-party apps ecosystem.

The set-top box shares virtually the same key innards as the iPhone or iPad, so existing apps could run with little to no re-writing.

An iPhone could double as the multitouch input device and the Apple TV could even “borrow” your iOS device’s front and back camera in apps that support this functionality.

Besides, with AirPlay rising as the staple of Apple’s living room strategy, any iPhone or iPad app can be wirelessly beamed to your HD TV via the AirPlay Mirroring feature, thus becoming a “television app” of sorts.

Apple only needs to improve AirPlay Mirroring to remove the annoying lag.

So, should Apple finally let devs create apps for the Apple TV or are they better off focusing on advancing AirPlay?