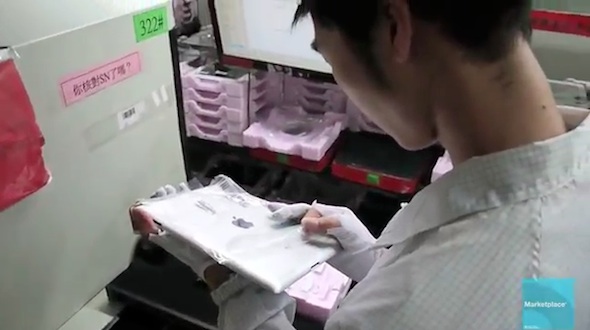 A new report out this morning from Far East asserted that Hon Hai Precision Industry, also know as Foxconn, is investing $210 million in an upcoming plant in Huai’an city meant to help satisfy the ever-growing demand for Apple products around the world.

Though this one won’t be as big as Foxconn’s other plants in Shenzen where an estimated 200,000 workers churn out millions of devices each month, the new facility will employ 35,8000 workers…

The China Daily based the report on the official confirmation by the office of Taiwan Affairs of Huai’an.

The plant housing the production line, to be located in Huai’an city, will produce components for American multinational corporation, Apple Inc, said the office of Taiwan Affairs of Huai’an city.

The facility is said to stretch 40,000 square meters and should be capable of producing up to $1.1 billion worth of products.

Foxconn will begin construction of the plant in October. It wasn’t known at press time which products will be assembled at the new facility.

As Apple’s product get more and more popular, so have the company’s manufacturing appetite been growing.

Apple is also said to be looking to produce iPads in Brazil.

We’ve also heard whispers that Apple is looking to make a massive $9.76 billion investment in Foxconn ahead of a rumored television set launch that Foxconn representatives recently hinted at (and denied later).

Apple is also reportedly investing some of its $110+ billion in cash reserves toward improving labor conditions in Foxconn plants.

I think it’s interesting that both companies have been making these investments.

Cook, who had been making sure that trains were running on time at Apple for years before being named the CEO last year, is often described by his peers as a spreadsheet-obsessed leader focused on operational efficiencies.

Surely neither company would be making significant investments unless there is a bigger agenda.

Like a television set or some other high-profile product category.