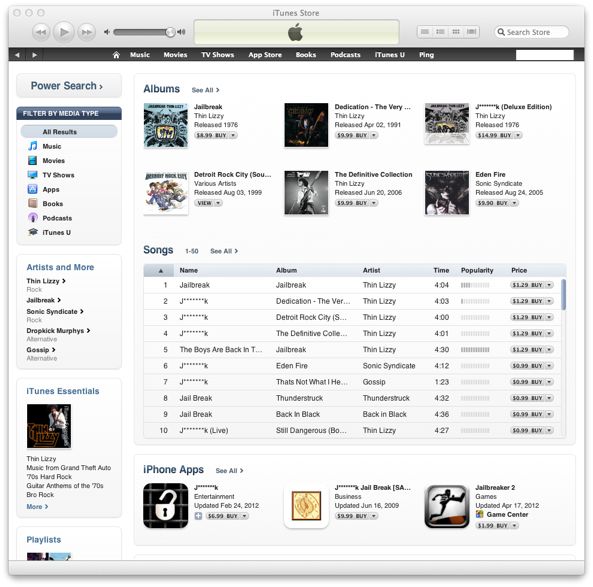 Apple has just taken its cat-and-mouse game with the jailbreak community to the next level as the company’s US iTunes Store began censoring all occurrences of the term ‘jailbreak’ across all content categories.

Apps, podcast episodes, music albums, television shows, movies – even e-book titles – everything is being affected with these store-wide policy change…

UPDATE: Musclenerd tweeted that Apple began uncensoring the term ‘jailbreak’ for iTunes songs and ringtones. The Next Web speculated that “an error” in  the iTunes ratings system caused the word ‘jailbreak’ to get added to a general ratings list. Some of the previously censored songs were fixed for me at the time of this update, but not all. We’ll update the story as soon as we find out more information.

iPhone hacker Musclenerd first spotted (via Shoutpedia) censoring on the US iTunes Store.

Go ahead, give it a try.

Launch iTunes, click iTunes Store in the left-hand Store section and enter ‘jailbreak’ into the search field sitting in the upper right part of the store window.

You’ll notice that all occurrences of the term ‘jailbreak’ in search results have been replaced with ‘j*******k’.

All store categories are being affected, from apps and music to podcast episodes, e-books and iTunes U content. 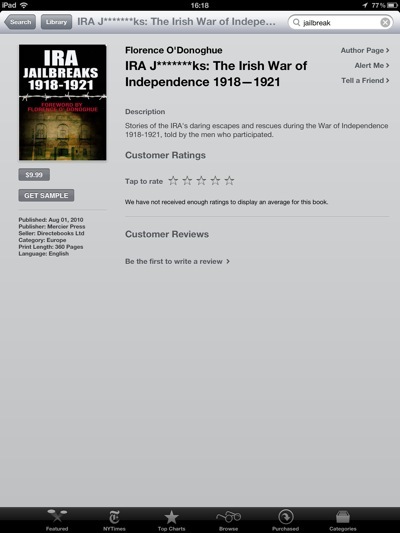 Yes, the iBookstore is also filtering the term in titles of electronic books, even if they don’t cover jailbreaking at all.

I mean, what’s the Irish war for independence got to do with jailbreaking?

Plus, it ain’t like the term ‘jailbreak’ is an expletive or something.

I couldn’t spot the filtering in any other iTunes Store other than the United States but these things take a while to propagate so don’t count on it.

Feel free to report down in comments if you notice the censoring in your regional iTunes Store.

What do you think, has Apple taken its fight against jailbreakers a little too far?