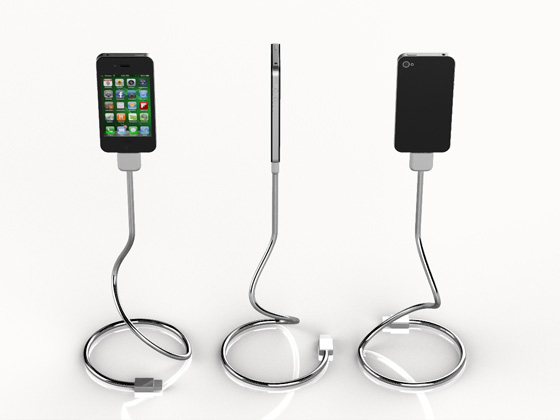 Kickstarter is home to all manner of cool and funky little gadgets. We’ve been known to lose hours just perusing the offerings of the clever people who put together Kickstarter projects, and sometimes we find one or two that tickle our fancy. Today, we found another to go alongside the many we have brought you already.

The latest specimen is the Une Bobine which, we are told, means “a coil” in French. When you check out the photos of what the thing is, then all will immediately make sense.

Basically, we are dealing with a new type of iPhone stand, but it is so much more, and incorporates a handy USB cable just for good measure. Awesome…

So what exactly is Une Bobine? According to the project’s Kickstarter project page, Une Bobine “is a patent pending flexible and eclectic stand, sync, and charging cable for iPhone.” Made of flexible cable, yet with enough strength to hold an iPhone aloft via its Dock connector, the stand also has a USB connector – which means it may not work with the next iPhone – at the other end. This means that the stand itself can both power an iPhone and sync it, too.

The Une Bobine has already surpassed its original $9,800 goal, with almost $59,000 pledged so far. $25 will get you your very own Une Bobine, and with shipping expected to commence not too long after the funding process ends, now is the time to stake your claim.