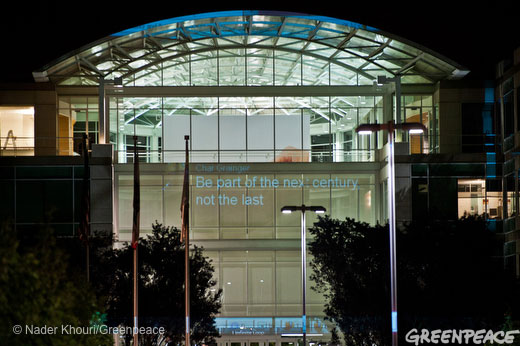 Environmental friendliness has been an important subject for Apple over the past few years. It’s currently building one of the largest solar panel farms in the U.S. to power its North Carolina data center, and plans to do the same thing in Oregon.

But apparently that isn’t enough for the folks at Greenpeace. The environmental organization recently staged a major protest outside of Apple’s headquarters in Cupertino, CA, pleading with the company to increase its ‘Green’ efforts…

But this wasn’t just a couple of folks holding card board signs, this was an all-out protest. AppleInsider reports:

“In addition to projecting messages of support from Twitter and Facebook users onto the side of the building, Greenpeace activists also barricaded themselves inside an eight-foot-tall, ten-foot-wide “survival device” that has previously be used to prevent Arctic drilling.

The demonstration also featured four Greenpeace members dressed as iPhones, with fully functional screens across their torsos that displayed messages from supporters via Facebook and Twitter.”

Greenpeace Executive Director Phil Radford says that the organization has collected more than 215,000 signatures for its “Clean our Cloud” petition, which asks Apple to use clean, renewable energy to power its iCloud service.

“Apple’s executives have thus far ignored the hundreds of thousands of people asking them to use their influence for good by building a cloud powered by renewable energy. As Apple’s customers, we love our iPhones and iPads, but we don’t want to use an iCloud fueled by the smog of dirty coal pollution.”

Apple has said that its massive data center in North Carolina will receive 50% of its energy from its new solar panel farm. And, once built, it says that its Oregon-based data center will run completely on clean energy.

It seems like Apple is doing quite a bit to reduce its environmental footprint. So why is Greenpeace spending so much of its time and energy on it?