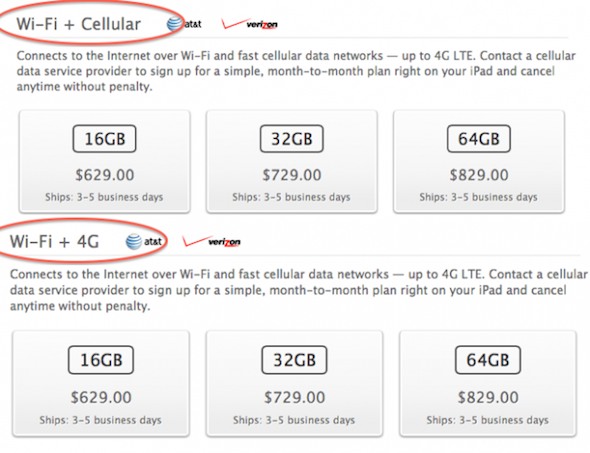 Well it looks like after months of fighting with the Australian government, and several other organizations, Apple has finally broken down and removed the ‘4G’ branding from its tablet.

9to5Mac made the discovery just a few moments ago, pointing out that the one time named ‘iPad Wi-FI + 4G’ tablet model has been renamed to ‘iPad Wi-Fi + Cellular’ in Apple’s online store…

The move should appease the ACCC (Australian Competition and Consumer Commission) and some of the other folks who believed that the “iPad Wi-Fi + 4G” was misleading to customers.

As you know, while the iPad is certainly capable of 4G data speeds on LTE networks here in the US and Canada, the tablet’s wireless data speeds are generally restricted to 3G in other countries.

The name change hasn’t happened everywhere yet, but it can be seen in several countries such as the UK, Australia, the U.S., Canada, Vietnam, Thailand, Singapore, New Zealand and Hong Kong.

It’ll be interesting to see how this affects Apple’s product naming and branding in the future. For example, if its next iPhone has LTE technology, how will it advertise that feature outside of North America?