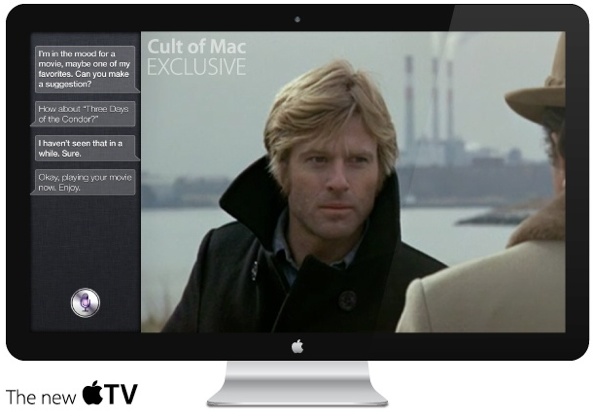 Despite Piper Jaffray’s Gene Munster calling for an HD TV set from Apple for what now seems like an eternity (his latest headline says it’ll be “bigger than the smartphone”), the damn thing just wouldn’t materialize and instead remains vaporware. Per latest chatter coming from a source who claims to have seen an Apple HDTV prototype in person, it “resembles an Apple monitor, only much larger”.

It apparently packs in a sophisticated FaceTime camera with facial recognition and uses Siri to initiate FaceTime calls. It’s unclear whether this person saw one of the many prototypes that will never make it into a product or the actual 50-inch thing Jony Ive is said to hide in his design bunker…

Cult of Mac editor Leander Kahney claims to have talked to the person familiar with the project:

According to our source, who has asked to remain strictly anonymous, the Apple HDTV looks like Apple’s current lineup of LED-backlit Cinema Displays but is “much bigger.” It has a built-in iSight camera for making free FaceTime video conference calls. And it has Siri, the iPhone 4S’s voice-activated virtual assistant.

The source offered nothing in a way of deeper Siri integration, the user interface, apps or other features.

As for the built-in FaceTime camera:

The camera is sophisticated, with facial recognition and the ability to zoom into the user’s face and follow them as they walk around the room. This allows users to make video calls from the couch across the room, rather than having to stand smack in front of the TV.

Kahney noted this particular source is well-placed, but warned he often gets to see prototypes that are in the early stages of development. Based on the provided description, the publication commissioned designer Dan Draper to do mockups.

As always, take this report with a grain of salt.

Leander also called in the past for a fifth-generation iPhone with NFC technology that would double as a portable login system and wrote that T-Mobile USA would get the iPhone by the third quarter of 2010.

Also, this and this.

Granted, such is the nature of reporting on the next big thing from Apple. The secretive company even keeps their own higher-ups in the dark concerning upcoming projects until the latest stage possible.

Apple also loves to disseminate misinformation to confuse the media.

With this in mind, it’s possible Kahney’s source may have seen a prototype. Whether or not it becomes a product Apple puts on the market remains to be seen.

As for the mockups, the artist’s rendition looks kinda nice, even if it’s lacking sexiness.

Did you like the mockups and would you buy a Cinema Display-like TV set from Apple?