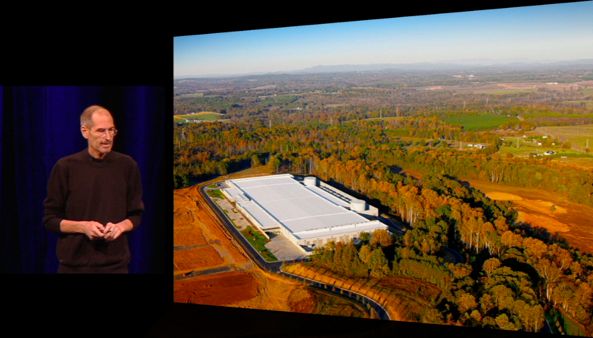 Hopefully this move will appease Greenpeace, whose recent report titled How Clean Is Your Cloud slammed Apple over the company’s use of “19th-century coal energy” for its data centers…

Bloom Energy CEO K.R. Sridhar confirmed the news in an interview with CNET:

Apple is an existing customer and they will use our fuel cells in their North Carolina data center.

As I explained in my recent article over at 9to5Mac, these cells dubbed Bloom Boxes are 67 percent cleaner than a typical coal-fired power plant or the grid because they produce electricity from natural gas or biogas.

According to Apple’s website, company facilities in Sacramento, Austin, Cork and Munich are 100 percent powered by renewable energy sources. The iCloud data center in North Carolina is a different story, though.

The CEO notes that no energy is lost over transmission lines as happens with the grid. Specifically, generating power from a natural gas fuel cell reduces carbon emissions by about 40 percent to 50 percent compared to the U.S. grid.

Costing between $700,000 and $800,000 and taking about as much room as a parking space, these fuel cells can generate 100 kilowatts of electric power each.

Bloom Energy was originally called “Ion America” when it was founded back in 2002, but got rechristened as Bloom Energy in 2006. It’s interesting that the company was funded by venture capital firm Kleiner Perkins.

If the name rings a bell, it’s because Kleiner Perkins was behind a $200 million fund dubbed “iFund” that invested in startups focused on iPhone software development. The fund helped incubate early iPhone game developers like Ngmoco, itself founded by former Electronic Arts executive Neil Young in July 2008. Ngmoco later got acquired by Japan-based DeNA for a cool $400 million.

Bloom Boxes generate less heat than energy cells used by the US Army so it comes as no surprise that Former Secretary of State Colin Powell is a board member since 2009.

Conspicuously, Powell is also a limited partner for Kleiner Perkins.

With the Obama administration putting clean and renewable energy sources on the map, Bloom Boxes are hot pieces of equipment and as such the perfect fit for a demanding client like Apple.

Hopefully, Greenpeace will takes note of this in their next report.