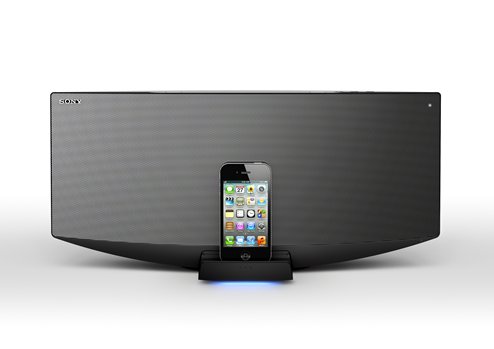 There isn’t anything much more boring than iPhone speaker docks. They do what you would expect, and that’s get audio out of an iPhone, iPad or iPod and tries to look good in the process.

Sony has somehow managed to pique our interest though, with two new speaker docks being announced that offer something a little different to the bland, boring speaker docks that have become the norm of late.

Sony’s two new models, the catchily named CMT-V75BTiP and CMT-V50iP, feature a new type of speaker dampening. Rather than the traditional dampening, these new speakers are actually damperless, with magnetic fluid being used to passively damp the movement of the speaker cone…

What all this means for the average user is a more svelte speaker dock design. The lack of standard damperners means that the docks themselves can be made thinner and smaller, which makes for more visually pleasing devices. Sony also claims the sound quality is improved as a result of this magnetic fluid too, which is something of a bonus.

Along with iOS device support, the two new docks also sport CD players and inputs that will take audio from other sources, should that be useful. FM, AM and DAB radio support is also included.

We don’t have a price for either model just yet, but we suspect neither will be cheap. If they’re as good as Sony claims though, we don’t really mind.