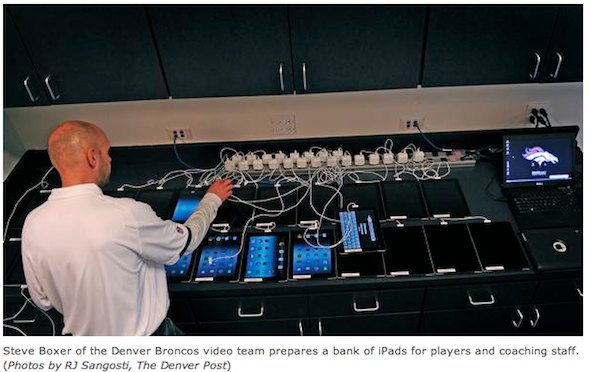 This is kind of cool. The Denver Post is reporting today that its hometown NFL team, the Denver Broncos, has decided to swap out its bulky 500+ page playbooks for Apple’s slim and trim tablet. The football team just purchased 120 iPads.

The organization feels that the tablet gives it a competitive advantage over its opponents. Not only is the iPad more mobile, but its library of available software gives it the capability to help players and coaches do far more than study plays…

Here’s an excerpt from the article regarding the Bronco’s specific iPad software:

“For the digital playbook, the team partnered with Parker-based technology startup PlayerLync. The PlayerLync app allows players and coaches to write notes and highly plays using the tablet’s touchscreen. The playbooks are then saved on remote computer servers, allowing players to access notes from previous games.

A key component to the software is that it runs in the background even when a player is not reviewing the playbook, enabling the app to determine when a coach has an update to push to players, such as a new short-yardage and goal-line package.”

But a team’s playbook is usually one of its most-guarded secrets. What happens if a player loses his iPad?

“With the iPad playbook, the Broncos have two ways to secure their game plan. The Verizon [LTE] network connection will allow the team to remotely wipe the iPad if it is lost or stolen.

If the network is disabled, the PlayLync app has a “time bomb” feature that deletes the playbook based on a set time determined by the Denver Bronco.”

Of course, the Broncos aren’t the first team to ditch their paper playbooks for iPads. Last year we told you about the Tampa Bay Buccaneers making a similar move.

But the concept is still relatively new to the NFL. Only three out of the 32 teams use tablets. And they still aren’t allowed to use them during games out of concern for foul play.

What do you think about iPads in the NFL (or sports in general)?