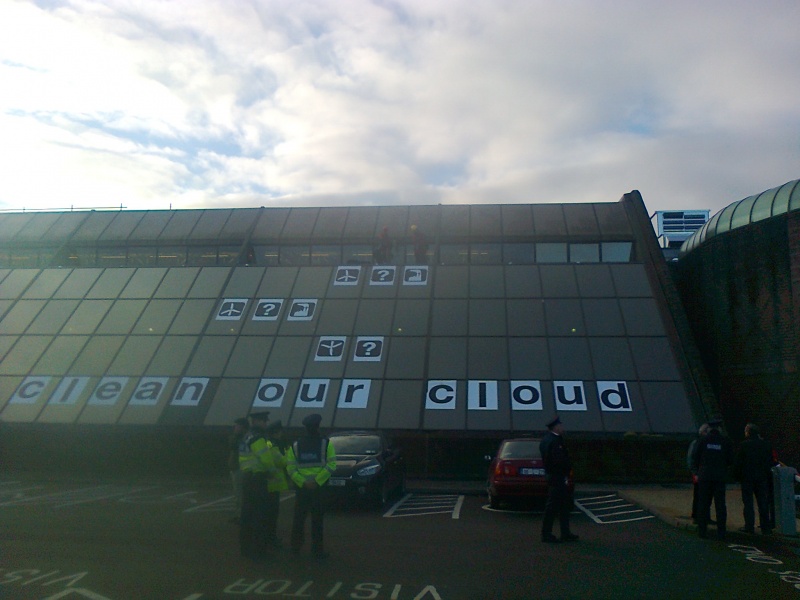 Just a day following an unpleasant report from Greenpeace, activists with the non-governmental environmental organization gathered outside Apple’s Irish headquarters to distribute leaflets and place banners urging the company to “clean our cloud”.

The Next Web describes an unusual sight outside Apple’s Distribution International building at Holyhill in Cork, Ireland where two activists placed a huge banner on the slanted rooftop this morning, seen in the above photo.

The activists reportedly managed to hand out leaflets to Apple employees who apparently voiced their support for the protest. 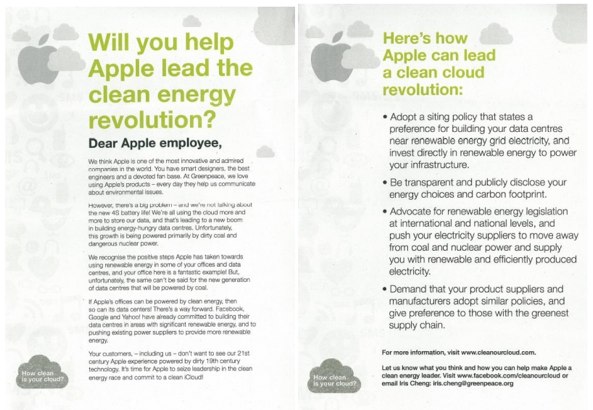 Yesterday, Greenpeace published its environmental report titled How Clean is Your Cloud which accused Apple and other Silicon Valley giants for using “dirty, 19th-century coal energy”.

Apple’s response, through the mouth of a company spokesperson:

Our data center in North Carolina will draw about 20 megawatts at full capacity, and we are on track to supply more than 60% of that power on-site from renewable sources including a solar farm and fuel cell installation which will each be the largest of their kind in the country. We believe this industry-leading project will make Maiden the greenest data center ever built, and it will be joined next year by our new facility in Oregon running on 100 percent renewable energy.

Greenpeace argued that with the iCloud facility in North Carolina the company “bought into energy that is old industry and technology”.

The design of the Maiden data center includes, among other solutions, a chilled water storage system, outside air cooling through a waterside economizer, white cool-roof design to provide maximum solar reflectivity and construction processes that utilized 14 percent recycled materials, diverted 93 percent of construction waste from landfills and sourced 41 percent of purchased materials within 500 miles of the site.

In spite of Apple’s green strides, Greenpeace picked the company as a prime example of irresponsible cloud operation that relies on outdated energy technology.

Is Greenpace on to something here?

A lot of folks I talked to are beginning to think that the organization is criticizing Apple just for the heck of it, because of its size and influence.