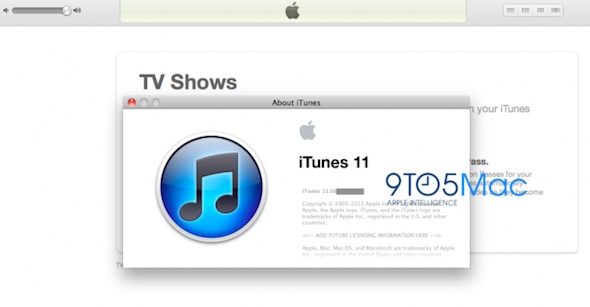 9to5Mac is reporting tonight that it has learned some details regarding the next major iteration of Apple’s media management software, iTunes 11. Apparently Apple has been working on it for months now, and has recently seeded an internal beta.

According to the report, the iTunes update will feature a host of new additions including support for iOS 6…

“Apple is working on iTunes 11 as a version of iTunes that supports their upcoming iOS 6 release and future devices. Apple typically releases new versions of iTunes alongside major new OS’s and mobile devices. While iTunes 11 is built as an iOS 6 compatible-release, according to sources, iTunes 11 could very well be a release coming farther down the road, and Apple could very well release another iTunes 10.x point update as a simple iOS-6-compatibility release.”

“Perhaps the biggest testament to this is a dedicated iCloud settings panel within iTunes. This panel is a centralized, always accessible spot for users to control iCloud related features while in iTunes.”

Last summer, we reported that we had heard iTunes 11 would receive a complete facelift and iCloud integration sometime this year. And since it appears that the iCloud part is panning out, our fingers are crossed that the facelift element does to.

What do you think? Is it about time for a new version of iTunes?