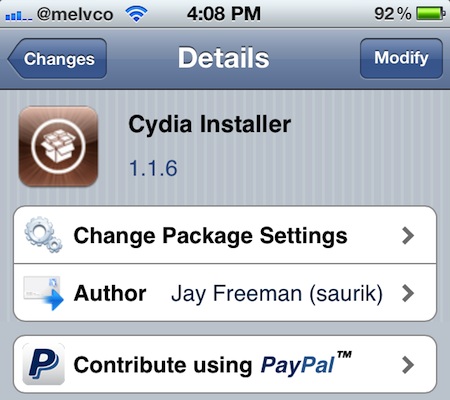 Those of you that appreciate a good prank might not want to install the new Cydia update. Saurik just announced that he has pushed out Cydia 1.1.6 to remove last year’s Twitter-inspired “dickbar” April Fools’ Day joke.

For those of you unfamiliar with the holiday, April Fools’ Day falls on the first day of April and is celebrated around the world with good-natured pranks and hoaxes. But apparently not everyone has a sense of humor…

“For April Fools’ 2011, I did a Twitter-inspired “dickbar” in Cydia; I apparently never removed the code and it just checks for “April 1″. 🙁 As many users just get confused and angry regarding Cydia’s April Fools’ jokes, I have pushed Cydia 1.1.6 (which removes the obsolete code).”

The move makes sense given that not everyone enjoys a practical joke as much as the next person. In fact, that’s the exact sentiment that keeps us from doing any kind of April Fools’ day posts here on iDB.

The bottom line here is that if you don’t install the new update, you’ll likely see an annoying scrolling ad-like banner in Cydia starting tomorrow. But it will disappear the following day.