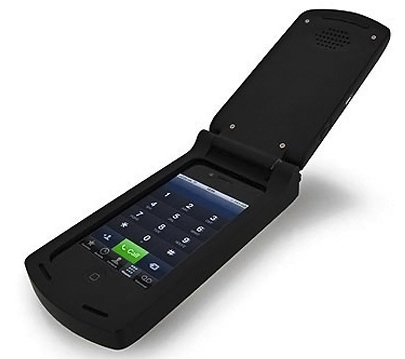 The styling of the iPhone 4, and now the iPhone 4S, has received a lot of praise over the past two years. It’s been described as “classic” and “retro.” In fact, Steve Jobs himself likened the handset’s design to that of a “beautiful, old Leica camera.”

But the folks at ThumbsUp! decided to create a case that would give the iPhone’s look a different kind of “classic, retro” feel. Introducing the 90’s Phone Case. The case turns your iPhone into a functional, albeit extremely bulky, flip phone…

This isn’t the first time we’ve seen ThumbsUp! try to take us back to the feature with an iPhone case. Last year the company unveiled the Mobile Phone Massif, an 80’s-inspired accessory that looked more suitable for Zach Morris than any modern-day hipster.

Just like its predecessor, the 90’s Phone case isn’t at all practical. It quadruples the size of your iPhone, making it almost un-pocketable, and it forces you to flip a cover open to use it. But for those of you who are interested in the case, it does have a working speaker lid and physical standby button.

The 90’s iPhone case isn’t available yet, but ThumbsUp! expects it to debut by the fall of this year for around $24.

What do you think of the 90’s Phone case?