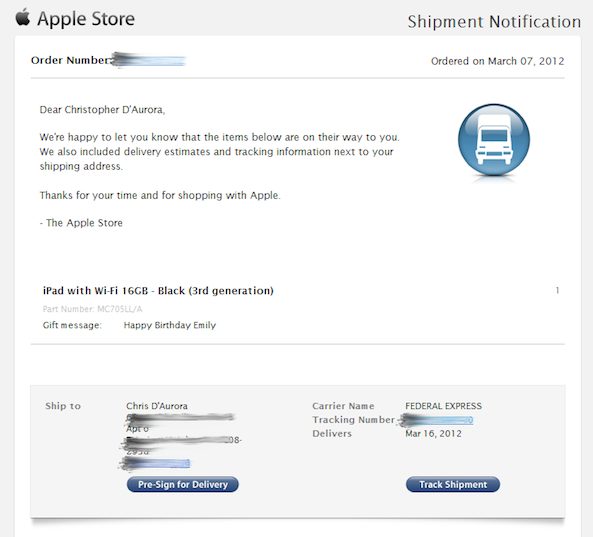 If you were particularly swift at getting your new iPad order in when the online Apple Store finally came back to life, then you may soon be receiving a shipping confirmation email in your inbox.

One AppleInsider reader has shared an email he received, which shows that his 16GB WiFi iPad (notice the 3rd Generation moniker, too?) is already winging its way to him via FedEx. Other similar reports are also being received, with UPS apparently also being used for iPad shipments by Apple.

We have seen in the past that Apple has allowed devices to leave its warehouses only to be held at the courier’s own facilities in readiness for the big day, which is Friday March 16th this time around. While it is entirely possible that a lucky few will receive their new very important work tools a day or two early, we wouldn’t expect any to be arriving before Wednesday or Thursday at the earliest.

The news that iPad pre-ordered across the globe are already selling out also suggests that in-store ordered will be extremely constrained, at least during the first few weeks of release. Each iPad and iPhone release has seen huge lines in major cities in most countries, and with demand apparently high for the new iPad, we aren’t daft enough to suggest anything different will happen this time around.

If you haven’t already ordered, it looks like you may be in for a little wait.

Have you had a shipping confirmation email yet?