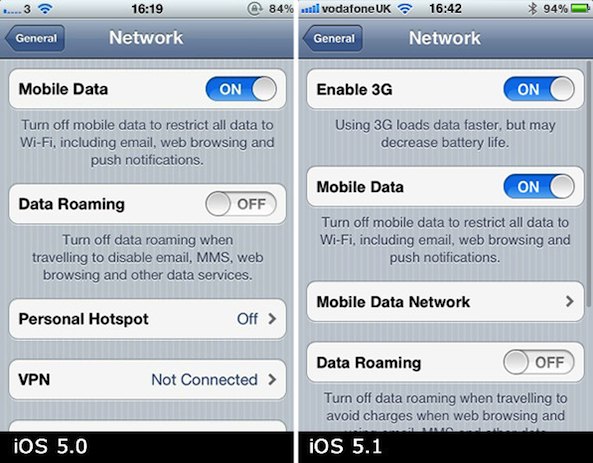 When Apple removed the “Enable 3G” switch in iOS 5, the decision was universally met with confusion, even anger by those of us that used it to save battery life in areas where 3G was flaky. By removing the option to disable it, Apple caused us all a headache we could do without.

Now, with iOS 5.1, Apple has reinstated the option quietly, once again giving us iPhone owners a little control over the speed at which our handsets connect to the internet. It may not seem like much, but this little switch is a big deal to many.

It’s perhaps fitting that Apple has brought a power saving feature back in a release of iOS which is meant to increase battery life in the power-hungry iPhone 4S, too…

The biggest question on our lips though doesn’t revolve around power usage, but rather Apple’s choice of wording. If the iPhone 4S is now supposedly a 4G device thanks to its use of AT&T’s network, should that switch not enable and disable the aforementioned extra “G?” Perhaps we need two switches to give the option of faux-4G, 3G and EDGE.

Of course we’re being a little pedantic here, but still, it’s an interesting thought nonetheless.

UPDATE: This seems to be carrier specific. Not all carriers (ie AT&T) will allow that, as explained by MacWorld:

That reinstated toggle, however, only appears for customers using 3G networks with their iPhones—and it doesn’t appear at all for AT&T customers using the 4G label-sporting iPhone 4S. As it stands now, if your phone newly reports itself as using a 4G network, you don’t get a switch to turn on and off 3G (or 4G) access; you only get the standard Cellular Data switch.