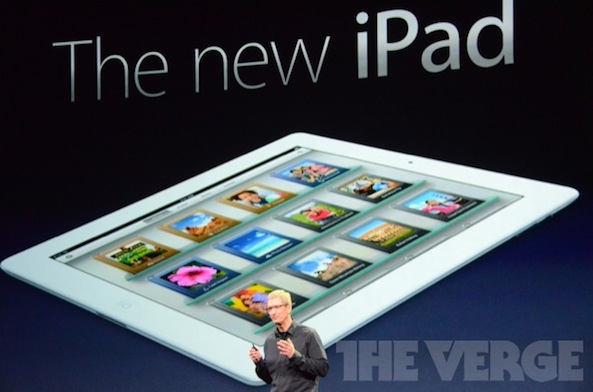 iPad HD, iPad 3. Those were a couple names the tech world speculated about before today’s announcement. All of them were wrong as we quickly realized when Tim Cook unveiled “the new iPad” earlier today.

But why is the new iPad simply called iPad? Couldn’t they call it the iPad 3 as good common sense suggested?

According to the WSJ, when asked about why such as simple name, Apple’s senior vice president of worldwide marketing Phil Schiller answered “because we don’t want to be predictable.”

Fair enough, but something tells me there is more to it than just not wanting to be predictable.

Have you ever noticed how Apple names its new iMacs, MacBook Airs or iPod touch every year?

2009’s iMac was called “iMac” and 2011’s iMac is still called “iMac”. Likewise, the MacBook Air has been called “MacBook Air” ever since it was launched a few years ago. Same with the iPod touch. A few refreshes and notable upgrades haven’t changed anything to the simplistic naming convention.

So why did Apple drop the suffix for the iPad?

For a long time, Apple has made it clear that it doesn’t care about specifications. RAM, GB, GHz, and other MHz don’t mean much to Apple, and the company always tries to subliminally convey the idea that it shouldn’t matter to you either. After all, all you want from your computer is that it just works.

Now it seems that Apple doesn’t want you to care about what generation of device you have too. You don’t have an iPad 3, you have an iPad. You won’t have an iPhone 5, you will have an iPhone. We’re at a point where the appellation should not mean anything anymore. Apple wants to save you the headache of figuring out if your iPad is newer than your neighbor’s. It wants to keep it simple for you because you shouldn’t have to worry about that. Remember, your iPad just works.

Back to the basics with simple and non-confusing names. Hate it or love it, it might be here to stay.