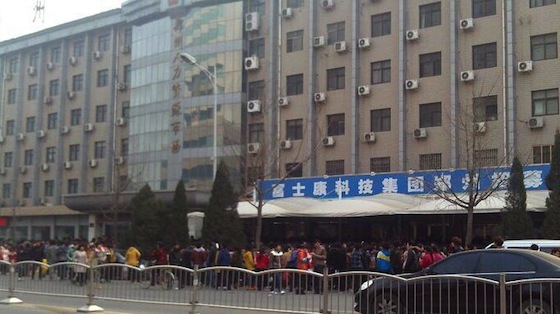 Apple’s handset business is doing pretty well these days. It recently gave birth to a new model, which seems to be doing rather well, and it’s making inroads into a major new market — mainland China.

Of course, when you start selling more phones, you have to hire more people to make them. M.I.C gadget is reporting that thousands of Chinese workers have lined up to apply for new iPhone production positions at Foxconn…

“On the 30th of January, thousands of hopefuls stood for hours outside a labor agency located in the Chinese city of Zhengzhou, the largest city of Henan province in north-central China. The lines stretched more than 200 meters along the road, and the people who were waiting in line with their applications just hope to get a job at Foxconn, as the electronics contracting giant ramps up its iPhone production at Zhengzhou plant.”

The news is interesting, to say the least, considering the report that ran in the New York Times last week. The article painted a bleak picture of the working conditions inside Foxconn’s facilities, causing quite a bit of commotion around the web. Some people have even announced plans to boycott Apple products in response to the allegations.

But none of this seems to be affecting Foxconn’s ability to find employees. Word has it that the manufacturing giant is working with the Chinese government to recruit 100,000 new workers for its Zhengzhou plant.