New figures released today by Research firm Strategy Analytics suggest that Apple’s iPad is still very much the top tablet for most, with Android’s share growing thanks to a newcomer to the scene.

Releasing figures based on worldwide shipments of tablets during the fourth quarter of 2011, Strategy Analytics shared that 26.8 million tablets were shipped during the quarter, a 150% increase over the same period the year prior. 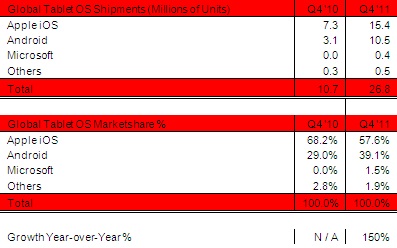 The reason for Android’s upturn in fortunes is being attributed to the release of Amazon’s Kindle Fire tablet, even though Apple’s CEO Tim Cook recently said that he felt the newcomer had made no impact on the iPad’s sales.

When compared to the same period of 2010, the iPad saw a fall in its share of tablet shipments, with Android seing growth. While well worth noting, the stat does not necessarily mean a swing is on the card. Strategy Analytics’ numbers have come under scrutiny before thanks to the fact they are based on shipments rather than actual sales. While we do not know if Android tablets are sitting un-sold on store shelves, we do know that Apple is currently selling iPads hand over fist.

Remember folks, you can make numbers say whatever you want!