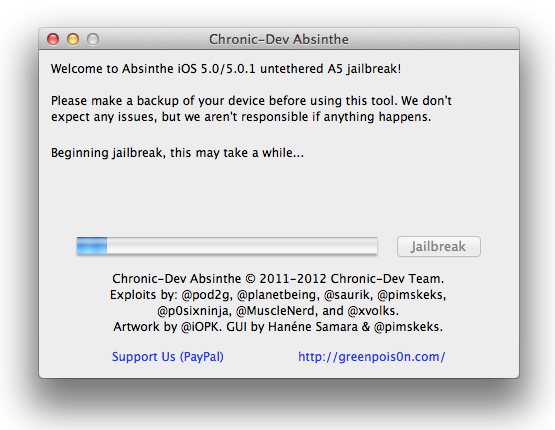 On Friday, the first ever iPhone 4S-compatible jailbreaking utility, Absinthe, was released to the public. And although it bears the Chronic Dev Team’s moniker, a lot of folks contributed to the app’s development including pod2g, Saurik, MuscleNerd, and others.

Recent Cydia data shows that more than 1 million people jailbroke their A5 devices over the weekend, thanks to the work of the above-mentioned hackers. Can you imagine if they would have charged $1 to download and use their software? They’d all be rich!

But they didn’t charge us a dime, and probably never will. It blows my mind to think that so many people would put so many hours of work into creating something, and then just give it away for free.

For those interested, however, there is a way to contribute to these guys. The group has set up a shared PayPal account for donations — which are distributed among the members in pre-arranged proportions.

No, this isn’t an abused animal commercial with Sara McLachlan’s ‘Angel’ playing in the background asking for money. If you don’t want to donate, that’s cool. It’s not mandatory, but it’s always appreciated.

Use this button to donate