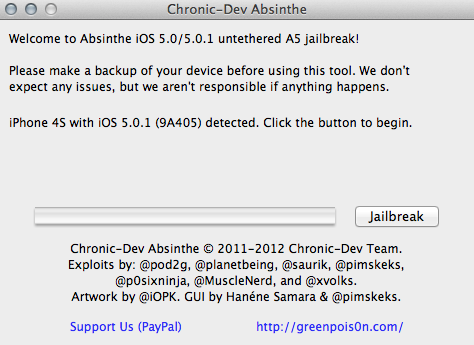 As most of you know by now, the A5 jailbreak was finally released this morning via Chronic Dev Team’s Absinthe app. While we haven’t had any issues ourselves with the software, some folks have been experiencing problems.

The reason for that is that the dedicated website, which is used in the jailbreaking process, is constantly crashing under the millions of users trying to jailbreak. So the Chronic Dev Team has released an update to fix that…

A few moments ago, pod2g wrote a brief blog post announcing the update:

“Chronic Dev Team has a released a new build that’ll point the web clip to greenpois0n.com instead of the absinthe dedicated page. This will handle better the workload.”

We’ve uploaded the new build — which is still for Mac users only — to our Downloads page. If you’re still experiencing problems after trying the new software, check out our post on how to fix the “establishing a database connection” error.

Have you been having problems using Absinthe? Did this update fix it?