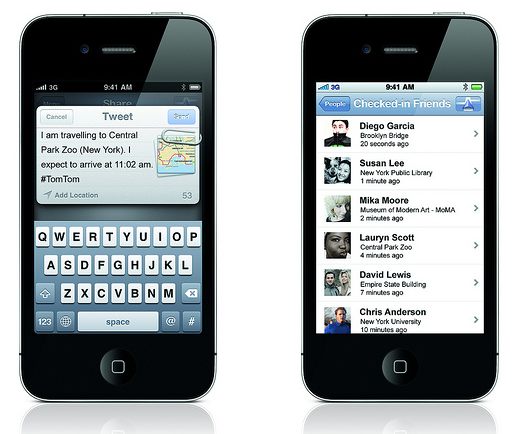 TomTom is obviously one of the biggest players in the navigation business, and with standalone devices selling alongside the company’s mobile apps, it’s also one of the most dominant.

Not happy to rest on its laurels, TomTom has been showing off a new version of its popular iOS app at this year’s CES, and it’s a little different. Namely, this incarnation uses social networks like never before, with Twitter and Facebook being used to actually help with navigation.

Version 1.10 of the current TomTom apps will take in the new social features, with abilities such as navigating to recent checkins on a network being added throughout the app. Notifications of expected arrival times and more can also be shared the other way, keeping your friends and family up to date on proceedings…

“The TomTom App for iPhone and iPad will be the first to use social networks as a source for turn-by-turn navigation. It can automatically plan routes based on information from Facebook events, places and friends. Drivers can also use the App to share their destination and arrival time on Twitter, Facebook, by email and SMS text.”

TomTom hasn’t yet given a firm release date for their updated app, other than to say that it is expected to roll out sometime during the first quarter. In fact, TomTom hasn’t really shared a great deal with us as yet, but we’ll be keeping an eye out for more information, and we will be sure to share it when we find it.

Does the idea of your navigation system talking to your social networks fill you with excitement, or dread?