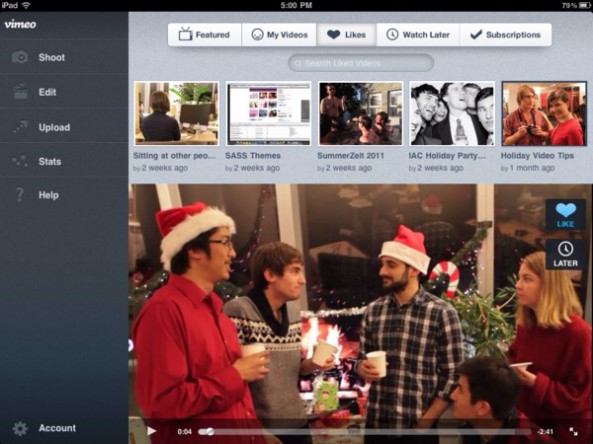 Vimeo has an iPad app in the works that’s expected to drop before the month is over, according to The Verge. The popular video service launched an official iPhone app several months back with on-the-go uploading and basic video editing.

The preview images show a totally new interface for managing and creating videos on the iPad. Not only will you be able to shoot and edit videos on the iPad in Vimeo’s upcoming app, but you can view your friends’ content and browse Vimeo for more videos in-app.

Updates are also coming to iOS “later this month,” with a full iPhone redesign and a new iPad-optimized app. The iPhone app also adapts the new grid start screen, and is much the same as the Android phone app. Also similar to the Android tablet app, the iPad version takes advantage of the larger screen for simultaneous browsing and video watching.

While you’re waiting for the new iPad app, Vimeo for iPhone can be downloaded for free in the App Store.