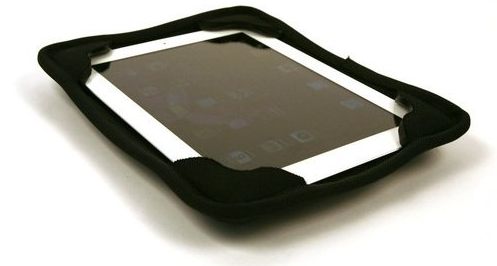 Until last year, G-Form was known for its extreme sports protective gear (elbow/knee pads). Then it introduced the Extreme Sleeve case for iPad, and it is now known for making one of the most durable tablet cases around.

The company has gone through great lengths to demonstrate the Sleeve’s toughness, dropping a bowling ball on an iPad wrapped in the case, and even hurling one from an airplane. And now it’s taken things to a whole new level…

The folks at G-Form have upped the anti with their latest promo video. Using a weather balloon, they’ve managed to launch an iPad into space wrapped in one of G-Form’s new Extreme Edge cases, only to have it free-fall a staggering 100,000 ft.

Did it survive? Watch:

“As far as we know, this is the first iPad ever in space. And definitely it’s the first ipad that’s ever free-fallen from space and survived to play more movies. We are usually known for making the most protective gear on the planet, so we decided why not raise the bar to off the planet too.”

You can find the Extreme Edge and other durable tablet cases in G-Form’s online store.