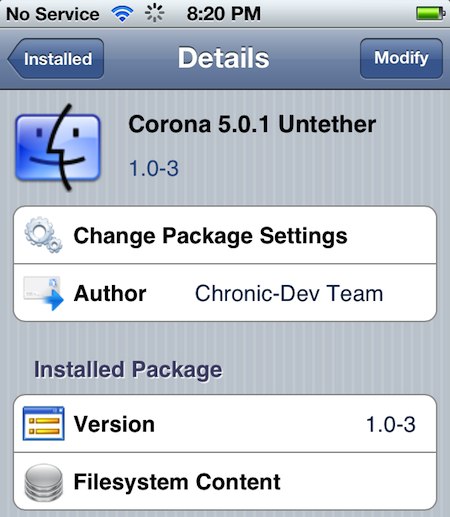 If you own an A4 device, chances are you spent your day jailbreaking. After months of waiting on a proper iOS 5 exploit, both the Chronic and iPhone Dev teams released untethered jailbreaks late last night.

There have been reports, however, of folks having some problems with the new untethers. One issue in particular, a “launchctl” error, has been fairly common. So Saurik has pushed out an update for the untether to fix it…

Corona (5.0.1 untether) apparently breaks `launchctl`; @planetbeing figured out what caused it, and I patched the package: upgrade to 1.0-2.

The launchctl issue also affects you if you used redsn0w to install the 5.0.1 untether. I have built 1.0-3, which can upgrade redsn0w users.

We haven’t noticed any problems with our devices, but those that are having issues may want to check this out (whether you jailbroke with Corona or RedSn0w). To get the update, just open Cydia and select the Changes tab. You should see the new Corona package version 1.0-3 populate at the top.

Are you having any problems with your jailbreak?